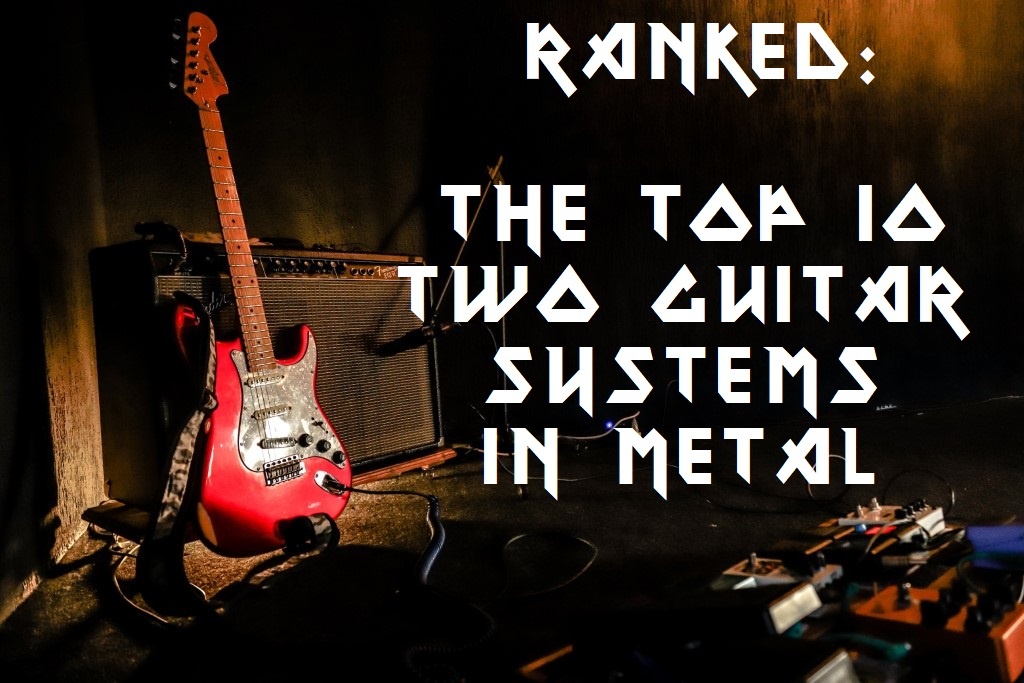 For this list, I will be counting down the best double-stringed assaulters of our parent’s ears in heavy metal. This also includes sub-genres such as speed and power metal with a bit of glam. Some are here more for their talent and success, but the overall influence is the main key. This includes the role one or both play in songwriting for the band that they are most famous for performing with. Sales success and Grammy awards don’t hurt, but inspiring other musicians is the ultimate legacy one can have.

No ultimate hair metal list is complete without Ratt. Despite all their mainstream success, Warren and Robbin are often overlooked when we look at the greatest at their respective position. The fact that their work decades ago is still relevant to day is astounding! These two contributed to many great hits during the golden age of metal.

Unfortunately, they fall short on this list in terms of changing the game. Stephen Pearcy was the main songwriter, giving them less of a role in their success. Also, they might have inspired the fewest musicians among those that made this list. The tragic falling out with and death of Robbin also doesn’t help.

It’s hard nowadays to be relevant in the music industry. So many people are,more into pop stars divulging in autotune or 300 rap songs singing essentially the same thing, or hip hop feuds. Somehow, Herman Li and Sam Totman have found the formula to success. They are helping to keep metal alive.

Herman’s reactions and challenges on YouTube also attract many fans, as do their music videos which often go viral. They are incredible contributors to speed metal! Almost ambassadors really. While they won’t be filling out stadiums like others in the past, they are proving to the world you can still make a career out of metal. Sam, as the main songwriter is equally important in their internet fame. With a Platinum single and Gold album in the United States, they have also found sales success despite being more of an underground sub-genre of metal. Their amazing talent is undeniable! They are also one of the big reasons so many young people want to learn to play guitar today.

One of the premier tag teams of the genre, these two helped Queensrÿche sell over 20 million units around the world. Sadly they aren’t given as much credit as many of their peers. Many others on the list have had far more success. This often leaves these two in lower regard than they should be held in.

They can easily at least hold a candle to most bands here. It’s not like they don’t have the talent, or the incredible solos to prove it. They have a huge fandom and have stayed relevant for a long time. Dispute this, of all the bands here, they seem to be the least well known.

Imagine selling over 12 million albums, despite secular stations and Christian radio both essentially banning you. Now think about how crazy it is for an openly Christian metal band to rule MTV in 1987, while televangelists tell millions of people you are satanic. It may be insane, but this actually happened! For those that say Stryper sucks, their fanbase is mostly atheist and agnostic! They are believed to have sold 8 million records to those that reject Jesus, while LITERALLY tossing Bibles at them! Either God is real and helped them, or their talent is undeniable…. Or both.

Their range has had them master everything from pop, soft rock, country, blues, to metal. They even have been known to play flamenco! Their heavy riffs, screaming solos, and Michael’s incredible high notes would be huge for pioneering power metal. Songs like Soldiers Under Command, Surrender, The Way, More Than A Man, The Reign, etc; have shown their dirty solos and heavy riffs. Over the years they have gotten more efficient, heavier, and cleaner. Don’t let the wardrobe full you, Stryper shows are full of action!

Korn is one of the biggest nu metal groups in history. This helped metal to get back into the spotlight that grunge had stolen from them. Most would even credit Korn with inventing nu-metal. The song Blind with the buildup from Head and Munky is widely regarded as what kicked it all off paired with the famous “Are you ready?”. This alone guaranteed their inclusion on the list.

Their sales exceed over 40 million total albums. This helps them to be seen as the third biggest nu metal act of all time. With 8 Grammy nominations, they are often praised as one of the best groups ever. Two wins from those nods only add fuel to the fire. Lastly, both of them contributed heavily to the writing.

Over 20 million albums sold around the globe? Check. Several Grammy wins? Check. Influential? Check. Legendary status? Most definitely. These two axemen were the main songwriters of one of the biggest thrash bands in history.

Of all the thrash groups, their sound is often described as the heaviest and fastest. Their lyrics were also easily the most consistently dark. If Skillet dropped the happy, hopeful messages and decided to play at a ridiculous speed, while trying to turn people away from God, this would be the result. Unfortunately, after Jeff passed away in 2013, the group would never be the same. While together, they etched their names in history and lived in infamy. According to 80’s televangelists, they were ALMOST as demonic as Stryper.

For all their success and classic songs, the list wouldn’t be credible without them on it. A few reasons kept them from reaching higher on the list. Firstly, most of the songwriting was done by legendary Bassist Steve Harris. The other bands here had one or both guitarists have greater involvement in writing. Another factor in this is while they have sold over 100 million records worldwide, they are less influential than others on this list, but still legendary in that regard as well. The final brick in their way is the fact that for over two decades, Janick Gers has been in the band. They are effectively now a TRIO.

No doubt Murray and Smith contributed amazing riffs and solos throughout their careers. The easy chemistry between them is also amazing. Just listening to them shows their talent. As great as Bruce Dickinson and Steve Harris are, Maiden wouldn’t be the same without the turbo twin attack. They’re legends for a reason.

Of the “Big Four” of thrash metal, only one is among the best-selling artists of all time. Few bands could replace a one-in-a-lifetime talent like Dave Mustaine and then almost immediately dish out two guitarists that can rival him. Widely regarded as arguably the greatest metal band of all time, Metallica seems to always be experimenting and looking for new sounds. This helps keep them relevant, even as vinyl sales are dying.

With amazing riffs and often breathtaking solos, they had to be included. Their variety is also worth mentioning. Their individual performances often get them hyped as “one of the greatest guitarists of all time” and their chemistry as a team makes them even deadlier. This legendary tag team has been considered among the elites for decades now. Just the length of their careers is also praiseworthy. It would be IDIOTIC to exclude them from the list.

While I admit Metallica is the overall better band, the fact that Megadeth is often mentioned in the same breath as their ultimate foes speak volumes to their talent. One could argue Megadeth is the greatest metal revenge since Ozzy Ozbourne’s solo career against Black Sabbath. While they were never destined to outsell the leader of the “Big Four” they came far closer than anyone else, mostly due to the string work.

One thing that gives them the edge is that the first three Metallica albums sold 10 million records. So what? You would think that helps Metallica right? Well, as it turns out, Dave Mustaine wrote parts for each of those albums. This implies as they were still figuring things out, they relied on their ousted member’s work. If Dave had kept his writings, would Megadeth have sold a few million more records? That’s hard to say, but Dave relied less on others, especially from the start. Marty Friedman has also been widely successful and critically acclaimed, as well as his old boss since the two split ways, showing they didn’t need each other to stay relevant.

This could possibly be the most influential metal band outside of Black Sabbath. Successful metal acts following in their footsteps range from Stryper to Babymetal, to about anyone classified as power metal. They have too many classic songs to count here, as it would take up the whole page. They were also nominated for the second-ever Grammy for the category of Best Metal Performance.

Tipton and Downing with Halford seemed almost unstoppable with a blazing path of destruction always left behind them. Don’t believe me? Just ask Madison Square Garden. While Halford could very well be the greatest frontman in history, his dynamic duo helped to define their sound. Without their chemistry and jaw-dropping performances mixed with superhuman endurance, Priest might never have broken out. Tipton contributed heavily to the songwriting with Halford and Downing was a founding member. The band also was relatively unknown before they all came together and added their Grammy-winning unique formula, which has sold around 50 million albums.

In this article:classic metal, metal