Bobby Caughron XSROCKnewsxsrocksite
How Many Of These Ratt Facts Do You Know?

How Many Of These Ratt Facts Do You Know? 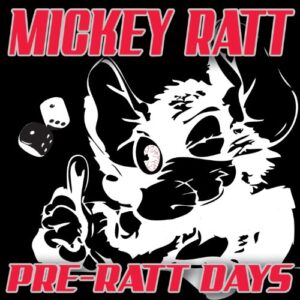 The band’s name was shortened to just “Ratt” in 1981 and Robbin Crosby joined the band.

Vocalist Stephen Pearcy originally aspired to be a Top Fuel drag racer before he was hit by a car while riding his bicycle at age 14. It took Pearcy months to recover and he couldn’t walk due to a leg injury. After receiving an acoustic guitar from someone, he began concentrating on becoming a musician. His love for drag racing led to him calling his record label “Top Fuel Records”. Ratt has actually sponsored a race car. Stephen Pearcy also has a successful solo career as well as having created multiple side projects that have resulted in interesting collaborations. Pearcy now has more than 20 albums under his belt as a performer and is set to release a double solo album in the near future. Stephen also has a book that reached the best-seller status entitled “Sex, Drugs, Ratt & Roll…My Life In Rock”.

Robbin Crosby was the only member of Mickey Ratt besides Stephen Pearcy that continued on when the band changed its name to simply “Ratt. Crosby co-wrote many of Ratt’s songs including “Lay It Down”, Wanted Man” and the smash single “Round And Round”. Robbin was married to playboy playmate Laurie Carr in 1987, but the couple would later divorce. Robbin also served as the producer for the metal band Lillian Axe. Crosby suffered health problems from 1994 until his death in 2002 from complications of HIV. His actual death was ruled a Heroin overdose.

Guitarist Warren De Martini joined Ratt in 1982 after he was recommended by none other than Jake E. Lee. De Martini was only 18 at the time. In order to learn Ratt’s songs, DeMartini moved into an apartment with Jake E. Lee, who taught him the songs that existed at the time. After Ratt broke up in 1992, DeMartini played for a short time with Dokken and was the touring guitarist with Whitesnake for a while before releasing two solo albums, an EP called “Surf’s Up!” and “Crazy Enough To Sing To You”. DeMartini reunited with the other members of Ratt for the “Collage”, “Ratt (1999)”, and “Infestation” albums.

Bassist Juan Croucier was in Dokken for 4 years prior to and played on Dokken’s debut album “Breaking The Chains”. Juan was actually in Ratt and Dokken at the same time for more than a year before finally leaving Dokken to join Ratt permanently. Prior to his stint with Dokken, Croucier was also in an early version of Quiet Riot with Randy Rhoads and Kevin DuBrow. Juan supposedly introduced Quiet Riot vocalist Kevin DuBrow to Frankie Banali, who would go on to re-form Quiet Riot and record the classic Metal Health album together. When Croucier left Ratt he owned his own studio and recorded and produced bands before returning to reunite with Ratt.

Before joining Ratt, drummer Bobby Blotzer had played with Don Dokken along with Juan Croucier whom Blotzer knew from school. Prior to reuniting with Ratt in 2012 for the “infestation” album, Bobby Blotzer recorded an album with Jani Lane (Warrant), Kerri Kelli (Alice Cooper, Night Ranger) and Robbie Crane (Ratt, Vince Neil) called “Saints Of The Underground”. In recent years Bobby Blotzer was the focus of a lawsuit over the use of the name of the band “Ratt’. Originally going out on tour as “Bobby Blotzer’s Ratt Experience, in which he and hired band members would perform live versions of Ratt’s songs, Blotzer would eventually claim that he had taken control of the “Ratt” name and began to tour using the Ratt name. This led to multiple court cases and lawsuits amongst the members of Ratt before finally being settled. Stephen Pearcy invited Bobby Blotzer to perform at one of his solo shows at the Whisky-A-Go-Go in April 2021, so there’s still hope for a full band reconciliation at some point in the future. 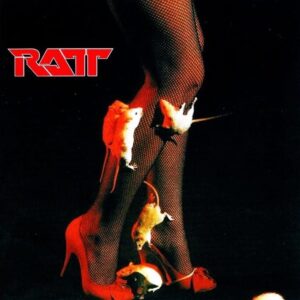 Ratt released their first EP called Ratt in 1983. Their manager was Marshall Berle, who was the nephew of classic comedian Milton Berle, who would later star in the Ratt music video for “Round And Round”. The legs in fishnet hose that are covered with actual rats on the cover of the Ratt EP belonged to none other than actress Tawny Kitaen who was Robbin Crosby’s girlfriend at the time. She would also be featured on the cover of Ratt’s first full-length album “Out Of The Cellar”. She also appeared in the video for “Back For More” and would later go on to star in Whitesnake videos and was briefly married to Whitesnake vocalist David Coverdale.

Released in 1984, Ratt’s “Out Of The Cellar” album went five times platinum in sales and made the band a household name with the single “Round And Round” which went all the way to #12 on the Billboard Hot 100 Chart. MTV helped the band tremendously with a heavy rotation of the videos for “Round And Round”, “Wanted Man”, and “Back For More”.  Ratt seemingly became an overnight sensation of the Sunset Strip glam metal scene. Ratt would go on the road opening for Bon Jovi and then on to tour the world with this best-selling album.

The album “Invasion Of Your Privacy” was released only one year after Ratt scored a huge hit with their debut album “Out Of The Cellar”. “Invasion Of Your Privacy” was a double-platinum selling album that was propelled by the hit singles “Lay It Down” and “You’re In Love”. The cover model was Stephen Pearcy’s girlfriend at the time, Playboy centerfold Marianne Gravate, who also starred in the video for “Lay It Down”. Critics loved the album and Ratt successfully solidified their presence as kings of Hollywood with this sophomore outing. The band would also become the first band to receive a Gold and then later Platinum-selling award for Ratt: The Video, which was the first commercial music video product to achieve that status in sales. The video featured videos from the Ratt EP, Out Of The Cellar, and Invasion Of Your Privacy as well as behind-the-scenes footage, interviews, and live tour footage. 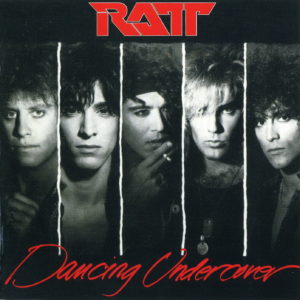 Ratt released their platinum-selling album “Dancing Undercover in 1986 continuing the tradition of releasing a new album each year after “Out Of The Cellar”. Ratt was making its way into pop culture in both movies and TV as the song “Body Talk” appeared in the Eddie Murphy movie “Golden Child’ and the song “dance was featured in an episode of the hit TV show Miami Vice. Meanwhile, vocalist Stephen Pearcy had developed into a full-blown sex symbol for the ladies and appeared in the August 1986 edition of Playgirl Magazine. 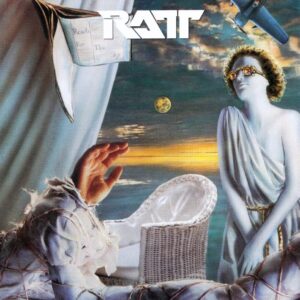 Ratt released “Reach For The Sky” in 1988. Powered by the hit single “Way Cool Jr.”, the album reached platinum-selling status. “Reach For The Sky” made it all the way to #17 on Billboard’s Album Charts. The strange collage that makes up the album cover has never been explained. Ratt also released “I Want A Woman” as a single from the album and had modest success with it as well. 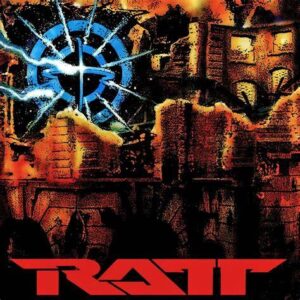 Ratt released “Detonator” in 1990. It would be the last album to feature the entire classic lineup of Ratt with Robbin Crosby and Juan Croucier both leaving the band after the album was completed. While “Detonator” was popular with Ratt’s many fans, it was the first album to reach only Gold in sales. The album was helped by the hit song “Lovin’ You’s A Dirty Job”. Jon Bon Jovi appears as a guest vocalist on the song “Heads I Win, Tails You Lose” with Pearcy singing the lead parts and Bon Jovi providing backup vocals. When the band toured for “Detonator”, Robbin Crosby’s addictions had reached a critical point and he entered rehab with Ratt finishing the tour with Michael Schenker filling in on guitar duties opposite Warren DeMartini. Unfortunately, “Detonator” was the last album that Robbin Crosby ever played on with Ratt. 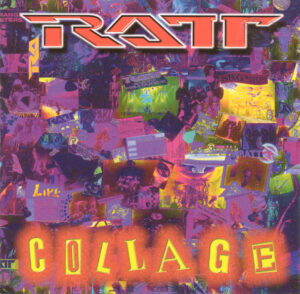 It would take 7 years before Ratt would resurface again with an album of re-recorded songs called “Collage” that had been previous demos and B-sides of leftover Mickey Ratt material. This would be the first album to feature bass player Robbie Crane who replaced Juan Croucier. The band took to the road to re-establish their presence in live venues with Warre DeMartini being the sole guitarist for the band. 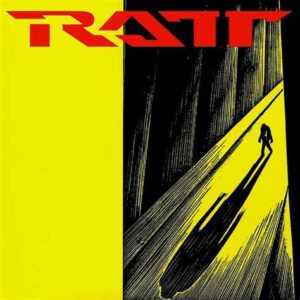 2 years later, Ratt would sign a contract with Sony records and release a new album simply called “Ratt”, also known as Ratt 1999. The formula strayed pretty far from Ratt’s original sound and unfortunately faded quickly. A & R guy John Kalodner had been given the task of revitalizing the recording career of several bands from the 80s glam metal scene including, Ratt and Great White. The late ’90s proved to be a tough time for the metal bands of the 80s to get radio airplay, videos shown in rotation, or even get great touring slots. Ratt 1999, displays the band experimenting with their sound with touches of modern rock mixed into a more bluesy rock direction.

In 2000, Stephen Pearcy left the band with Warren DeMartini and Bobby Blotzer continuing touring live, but making no records as Ratt with Jizzy Pearl(Love/Hate, Quiet Riot, L.A. Guns) as the vocalist and John Corabi (The Scream, Motley Crue) on Guitar. 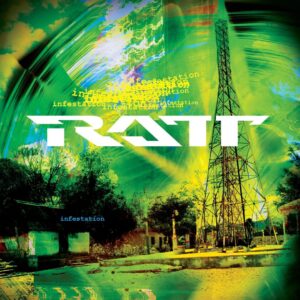 In 2010 Ratt returned to their former glory days with an album called “infestation” which saw the band take their signature sound from the 80s and go back in time with the sound of their hit albums “Out Of The Cellar” and “Invasion Of Your Privacy”. The album was a big success with Ratt fans with critics calling it one of their best albums. The album featured former Quiet Riot guitarist Carlos Cavazo playing Robbin Crosbys’ styled parts opposite Warren De Martini. The album hit the charts at #30 as a testament that Ratt was indeed back for more.

Regardless of “Infestation” being a hit with fans and critics alike, the band members still could not all get along with one another and DeMartini would leave the band again, as well as Carlos Cavazo and drummer Jimmy DeGrasso who had replaced Blotzer after the band’s trademark fights. Chris sanders would join the band as a touring guitarist for a while before retiring from the music business altogether. The latest known lineup for Ratt was: Stephen Pearcy – lead vocals, Juan Croucier – bass, backing vocals, Pete Holmes (Black N’ Blue) – drums, Jordan Ziff – lead guitar, backing vocals, and Frankie Lindia (David Lee Roth) – rhythm guitar, backing vocals.

Pearcy has been vocal in recent days about his wishes for the classic Ratt lineup’s members to reunite for one last Ratt album.