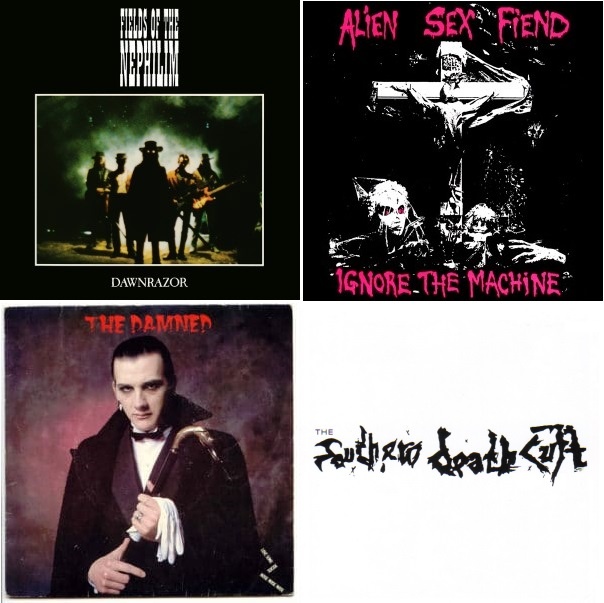 Recently, we published the article “10 Bands That Helped Form The Gothic Rock Movement” which you can read here.  Now, we’re going to start to dig in a little deeper and take a look at some more bands that started, continued,  and helped Gothic rock evolve during the 1980’s.

The Lords Of The New Church 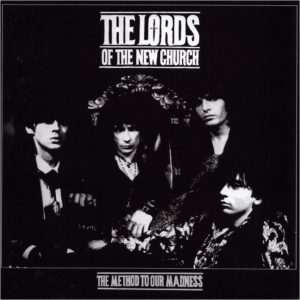 In the late ’70s and early ’80s punk had seemed to reach it’s a peak, as far as growing the genre at that time.  Several artists and bands from the punk scene transitioned to a more gothic rock sound. Stiv Bators, former vocalist for the Dead Boys moved into a goth-rock direction with The Lords Of The New Church.  The band was somewhat of a supergroup featuring Bators, Brian James (The Damned), Nick Turner (Barracudas) and Dave Tregunna (Sham 69).  The Lords Of The New Church heavily embraced the American Gothic style.  The band mostly dressed from head to toe in black leather and Bators often wore black makeup around his eyes and black lipstick.  The band recorded three studio albums “The Lords Of The New Church”, “Is Nothing Sacred”, and “Method To Our Madness” before breaking up in 1989. Tragically, in 1990, Stiv Bators was struck by a taxi cab in Paris France and died from a traumatic brain injury. 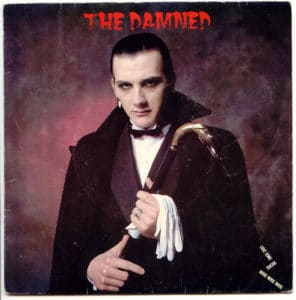 Started as a punk band in London, England in 1976, The Damned moved to a more gothic look and sound in the ’80s and still continue to be a punk/goth hybrid to this day.  The original band lineup featured singer Dave Vanian (who wore white makeup to resemble a vampire), guitarist Brian James, drummer Rat Scabies, and bassist Captain Sensible.  The band has had several lineup changes over the years and have released 11 studio albums Damned Damned Damned (1977), Music for Pleasure (1977), Machine Gun Etiquette (1979), The Black Album (1980), Strawberries (1982), Phantasmagoria (1985), Anything (1986), Not of This Earth (1995), Grave Disorder (2001), So, Who’s Paranoid? (2008), and Evil Spirits (2018). While the band is most known for the singles “Smash it Up” and “New Rose” from their earlier days, they have an avid goth following around the world.

Formed in Germany in 1980, the original lineup was all-female, which set them apart from many other goth bands at the time.  While the band only released four full-length albums consisting of Fetisch (1983), Tocsin (1984), Viva (1987) and Devils (1989) they still made a lasting impression on the scene. They scored three charting singles on their debut album in the U.K. Indie charts, which is an amazing feat considering the band performed the songs entirely in the German language. While the band did attempt a change in musical direction toward a pop sound, in the end, they are known primarily more for the dark, gothic rock sound that they created over the years. The band ended in 1990.

Featuring Ronny Moorings, Anka Wolbert, and Pieter Nooten, Clan Of Xymox, (also known as Xymox) started in 1981 the band incorporated electronics into their overall sound.  The band has been cited as a huge influence on may electronic goth bands that came after them. They are often referenced as the first Darkwave band. While they would switch their sound later, they returned to a more electro-goth sound. The band is known for creating dark, often tragically romantic sounds that range from heavy and brooding to light and ethereal. The band has a lengthy discography that includes the following 16 studio albums: Clan of Xymox (1985), Medusa (1986), Twist of Shadows (1989), Phoenix (1991), Metamorphosis (1992), Headclouds (1993), Hidden Faces (1997), Creatures (2006), Notes from the Underground, (2001), Farewell ( 2003), Breaking Point (2006), In Love We Trust, (2009), Darkest Hour, (2011), Kindred Spirits, (2012), Matters of Mind, Body & Soul, (2014), and Days of Black, (2017).

Fields Of The Nephilim 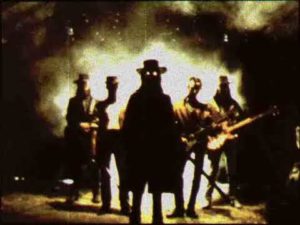 Started in 1984, Fields Of The Nephilim created a new and unique approach with a look that crossed the old west, albeit a darker demonic look with traditional goth elements.  The result made them quite interesting and rapidly secured them a devoted following. Reminiscent of possessed spaghetti western cowboys, the band which originally featured vocalist Carl McCoy, Tony Pettitt on bass, Paul Wright and Peter Yates on guitars,  Gary Wisker on Saxophone and  ‘Nod’ Alexander Wright on drums took their name from the Old Testament of Hebrew text which means a race of giants called The Nephilim that were a hybrid cross between Angels and Humans or possibly “fallen angels”. The band released their debut EP, Burning The Fields in 1985 and followed it up quickly with their first full-length album Dawnrazor in which landed them on the #1 spot on the indie charts in the U.K. While the band continued to chart in the U.K. they never quite managed to achieve the success of Dawnrazor. The band has released the following full-length studio albums: Dawnrazor (1987), The Nephilim (1988), Elizium (1990), Fallen (2002), and Mourning Sun (2005).

Formed in 1981 The Southern Death Cult featured Ian Astbury on vocals, Barry Jepson on bass, David “Buzz” Burrows on guitar and Haq Nawaz “Aky” Qureshi on drums. The band released the double “A” side singles  “Moya/Fatman” which went to #1 on the U.K. Indie chart.  However, the band was short-lived and Astbury disbanded the group in 1983.  The band does one self-titled album that was released after the band had already broken up. Ian Astbury would later join guitarist Billy Duffy in creating “The Cult”.  The Cult still had gothic overtones with the release of their first two albums “Dreamtime” and “Love” but would later move in a more traditional hard rock direction.

While Dead Can Dance often rejected the term “Goth”, that’s exactly how their early sound has been described. Formed in Australia in 1981, the band would later relocate to England. The band mixed unique traditional elements to form something different.  Ethereal and dark, the music covered a vast array of territory while maintaining a sound unique to the band. While some people see their first two albums as gothic, the band has rejected most labels on their sound and tends to create music that crosses over many genres, styles, and feelings. They have released nine studio albums to date: Dead Can Dance (1984), Spleen and Ideal (1985), Within the Realm of a Dying Sun (1987), The Serpent’s Egg (1988), Aion (1990), Into the Labyrinth (1993), Spiritchaser (1996)
Anastasis (2012), Dionysus (2018). 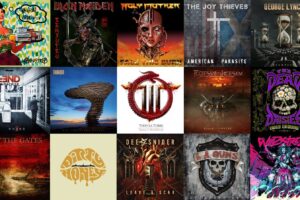 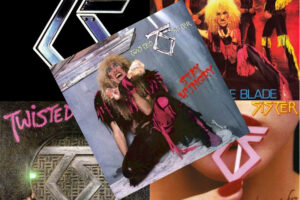