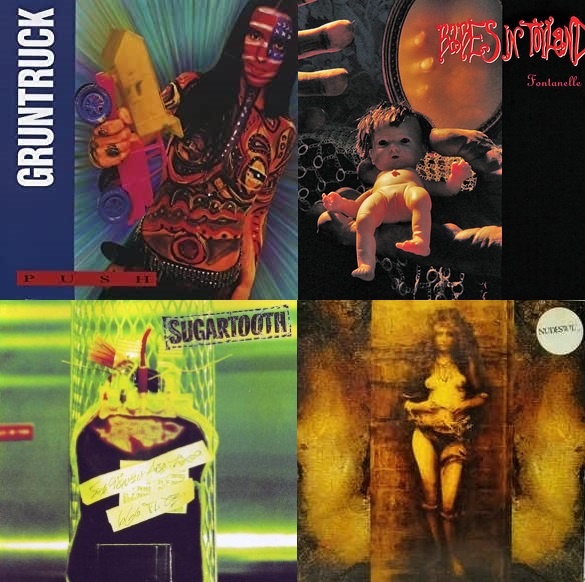 Grunge music exploded commercially with the first riff of Nirvana’s “Smell Like Teen Spirit”. The scene became huge very quickly with bands like Alice In Chains, Soundgarden, Stone Temple Pilots, and Pearl Jam becoming successful and elevating the scene to the forefront during the alternative rock movement of the early to mid-90s. For every band that made it big and was blasted on every radio and video channel, there were others that were also great bands but just somehow seemed to miss hitting the big time…

Gruntruck – The band was formed by vocalist Ben McMillan and drummer Norman Scott who had previously worked together in the Seattle band Skin Yard. Gruntruck was considered grunge but their sound decidedly leaned a little more on the metal side. They released the following albums during the 90s: 1990: Inside Yours (eMpTy Records/Roadrunner Records), 1992: Push (Roadrunner Records), 1996: Shot, Illusion, New God EP (Betty Records)

Sugartooth – Timothy Michael Gruse (guitar), Marc Hutner (vocals, guitar), and Josh Blum (bass) formed Sugartooth after playing in separate groups in the California area. The single “Sold My Fortune” was a decent hit for the band and was featured on an episode of MTV’s Beavis & Butthead. The band only released two albums: Sugartooth (1994) and The Sounds of Solid (1996). Their drummer Joey Castillo would go on to work with numerous bands including Danzig and The eagles Of Death Metal.

Nudeswirl- The band was formed by Shane M. Green, Chris Wargo, and Mike Toro in New Jersey. The band released a self-titled independent release in 1989, followed by a 1993 release called “Nudeswirl” by Megaforce Records. Two songs from the album, “F Sharp” and “Buffalo,” were released as singles. The band toured with White Zombie and Danzing and performed at 1992 Lollapalooza.

Babes In Toyland – Formed in Minneapolis, Minnesota, by vocalist and guitarist Kat Bjelland, along with drummer Lori Barbero and bassist Michelle Leon, who was later replaced by Maureen Herman in 1992. Babes in Toyland released 3 studio albums: Spanking Machine (1990), followed by the commercially successful Fontanelle (1992), and Nemesisters (1995) before eventually breaking up in 1997.

Mudhoney – Often referred to as the granddaddy of grunge. Their debut EP Superfuzz Bigmuff is considered one of the most influential releases for helping develop the Seattle sound of the 90s. It’s interesting to note that their place in the history of grunge music did not correlate into a commercial success for the band that other groups like Soundgarden, Pearl Jam, Nirvana, Alice In Chains and others achieved. The band released the following albums during the 90s: Every Good Boy Deserves Fudge (1991), Piece of Cake (1992), My Brother the Cow (1995), and Tomorrow Hit Today (1998)