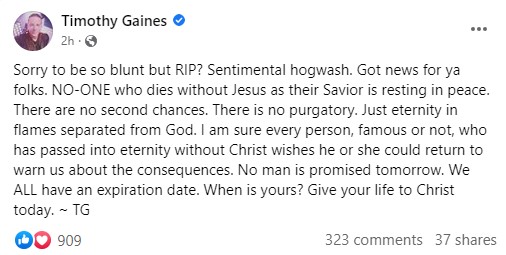 Former Stryper bassist Tim Gaines posted a video of Jeff Beck right after his death was announced. It appears someone posted RIP underneath the video as a comment and then seemingly Tim Gaines posted what appears to be a response underneath it that many are calling a tacky and harsh statement, following the death of guitarist Jeff Beck.

You can see the posts from Tim’s Facebook below:

While he doesn’t mention Jeff Beck by name in the post below the video, many were commenting back to Tim that his post was in poor taste and asking for compassion for Beck’s friends and loved ones.