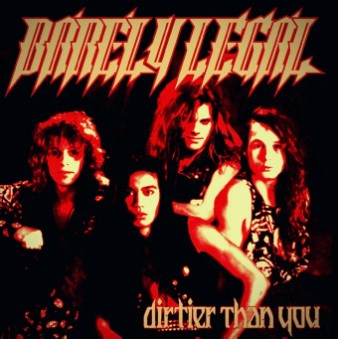 Album: Dirtier Than You

Fans of the sleazy metal sound of the late 80s and early 90s are in for a treat with this recently discovered gem released by DDR Music Group. If you’re an aficionado of the metal from that time period like I am, you won’t want to miss out on adding Barely Legal to your CD collection. While the band was strictly independent and never saw a major label debut, this is a well-produced album with swingin’ rhythms, blazing solos, and sleazy, sweaty, sex-tinged songs. Fans of Motley Crue, L.A. Guns, Guns N’ Roses, Faster Pussycat and all those who followed them will absolutely love this release. Standout songs include the opener “Dirtier Than You”, “Low Down Dirty Lies”, “Tough Times” and “Should’ve Known Better”. “Tears In The Rain” is an excellent radio ballad reminiscent of songs like “House Of Pain” by Faster Pussycat and “Ballad Of Jayne” by L.A. Guns. It’s a real shame that these guys didn’t hit the big time during the Sunset Strip era of metal greatness, but that’s all the more reason to pick this up for yourself and have a new “hidden gem” band to recommend to your friends.

Tears In The Rain

You can order your copy exclusively through DDr Music Group by going here: