XS ROCK: So I’ve had a chance to listen to the new album, The Devil You Know and it’s fantastic. It sounds just like what I remember from listening to the first two LA Guns albums years ago. It’s kind of got that raw sort of mixture of metal with a little bit of punk in there. Is that raw edge that you’ve brought to the last couple of albums by design or is that just what happens when you and Tracii get together?

Phil: That’s exactly what happens when me and Tracii get together. You know, no fucking around. We’re clearly making up for lost time. It came together very quickly after The Missing Peace. It came together naturally. We wrote it while we were traveling all around the world. When you’re having fun, you know it’s not really work.  When you look at it and you know it was a tremendous amount of work, but is was so much fun and the end result is so fantastic and you know people like yourself who know music, appreciate what’s going into it and that’s a great feeling.

XS ROCK:  So tell me a little bit about recording this album.  I know you said you were working on it while you were on the road on the last tour,  I assume you guys are using a little bit different methods than back when you were doing the self-titled album and albums like Cocked and Loaded.

Phil: It’s not even that it has that sophisticated of a technology to it,  Tracii sits and plays his guitar, most the of time, when he’s not sleeping or eating. We just plugged in to an iPad with Garage Band and it’s what you think it is.  It’s pretty much finished right in front of me. And you know  when you hear the music for a song like Rage, you know that it has to be compatible lyrically, with something so strong and so smashing and powerful.  It’s good to be in close proximity and work on stuff like that while being on the road.  Some bands have to come off the road and go to a country retreat and detox and then say, okay we’re ready now. Let’s start with the recovery process. We’re quite a bit different, and I think it comes through because you know there’s obviously an energy there.  Really it’s with Shane, Johnny, Mitch Davis, who I do my vocals with in New York and Scotty Ludwick, our manager. It really is a good democracy.

XS ROCK: Where do you get your lyrical inspiration for songs?

Phil: None of it is auto-biographical. You know it sounds like a lot of anger and frustration in those songs, but a lot of my life is just pretty damn good right now, you know?  We’ve been through these emotions before, rage and jealousy that’s inside you.  I’m going to give Mitch Davis a lot of credit lyrically. I’m lazy. I’m slow. It’ll take me a week or two to come up with something. His ideas are good and I don’t have a problem with it. I don’t feel like that I have to write all of the lyrics. That’s not my only function in the band.

XS ROCK: Bernie Torme recently passed away. You recorded a couple of albums with him after Girl ended. Can you tell me a little about that?

Phil: When Girl broke up, I was pretty much musical poison in the London music scene. Nobody really wanted to work with me, you know?  At that time, it was like labels were looking for another Duran Duran or Spandau Ballet. You know, that kind of stuff…. and they’d say Phil, if you get a haircut, you can come back and it was a real down time for me. So, when I did get the call from Bernie asking if I’d be interested. first of all, It was an honor to even be called.  I couldn’t understand why he was looking for a singer. He was perfectly adequate doing it himself. He just wanted to try a different approach and concentrate on just guitar and see how it would go and it went gangbusters. We made the back to Babylon album.  It was so fantastic, and you know we played the old big clubs up and down the country and we packed them out. A label should have signed us. Maybe not a big major-label but somebody should have signed us. It was a travesty that they didn’t. Eventually we got frustrated and it was about this time, when I got the call to come out yo L.A. and met Tracii and put this L.A. Guns thing together.  It didn’t take me more than a year-and-a-half to go back to England with the gold record under my belt and a great big fuck you to all those labels and all of those people at the label that wouldn’t give us the time of day. You know we would have done something. It’s tragic because it was a good band and it was a real band. But, hat’s just the nature of this business.

XS ROCK: I know you’ve got a lot of memories tied to that. I mean I think most people associate memories with music when they listen to it but in your case, even more so, because you wrote those songs.

Phil: It was such great learning experience. I last saw him on the end to the last show we did in London. He liked Tracii and they got on well. He was going to jam with us. But he didn’t have his gear with him. He just wanted to come and say hi and watch the show. It was really, really great to see him and then he took viral pneumonia. I just pulled out the album “Back To Babylon” and listened to the track “Mystery Train” and just got all choked up thinking about him. 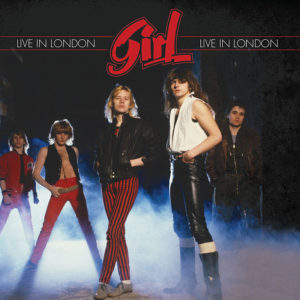 XS ROCK: Would you ever consider or do you think there’s ever a possibility of you doing maybe a one-off show or something as a Girl reunion with Phil Collen?

Phil: You know in light of Bernie passing, never say never again. I know Phil’s busy and he’s doing great and he’s branching into production and you know he’s a real go-getter. It would be awesome. If I’m in the right place at the right time…But, on a full blown reunion….I don’t know if that’s logistically possible.

XS ROCK: For someone that doesn’t know you personally, what would they be surprised to know about you?

Phil: Oh I don’t know I mean some people are still surprised when they hear that I’m English!  You know you can definitely hear an English accent in some of the songs. I don’t consider myself a pretentious person. It’s not an act.

XS ROCK: You’ve been doing this for a long time obviously, but if you weren’t performing in a band, what kind of career do you think you would have had?

Phil: Professional surfer, I suppose. Ha ha ha. Just kidding. I’ve never surfed in my whole life. I left the music business in 1992 after The Vicious Circle album. I couldn’t be bothered with it. I became a recording engineer, actually a music production engineer and I worked for Fox in L.A. and I did very well and I enjoyed it and I really got on well with my colleagues. I swear to God between 92 and 96,  I honestly in my heart, was sure I was done. As a touring working musician I thought it was completely over. Right around that time that was when I did my solo record “More Purple Than Black”. When I did my interview at Fox and they wanted to know about my abilities, I pulled out that album. They hired me on sight, and it was just like this is great.  This is what I need and yeah, I really, really, really enjoyed it a lot and then one day,  I got a call from Mick Cripps saying we’ve been offered some money to do a reunion. And as a musician, you don’t give up the road, the road gives up on you and the road’s just not ready to give me up yet and I’m okay with that. These amazing incredible ideas that Tracii’s knocking out and the way that Shane (Fitzgibbon) and Johnny (Martin) are interpreting them… it’s hard not to. It is just amazing we are having a lot of fun making some great music,  doing what we love the most and looking forward to getting out this summer and playing live for everyone.

XS ROCK: So what do you consider your greatest accomplishment so far?

Phil: Well you know “fortune favors the brave” so just deciding to get the fuck out of London and come to LA and just completely do something like that in that stage in my life. You just have to have a little bit of faith in yourself and a little bit of faith in destiny and don’t give up on your dream. That for me is it. I can say it’s a great accomplishment to be able to say that I’m doing and loving what I set out to do, and doing it with integrity. That’s something that I am extremely proud of.

XS ROCK: What would you like to say to our readers and all your fans out there?

Phil: Thank you for your support. Thank you for coming out and seeing us! Live music is pretty much our main source of income now. Support the artists! If you can buy some music, please do. Buy an LP or buy a hoodie. Don’t say that you’re a big fan because you have 12 of our songs on your YouTube playlist. Buy a ticket to the event and come see us live this summer!