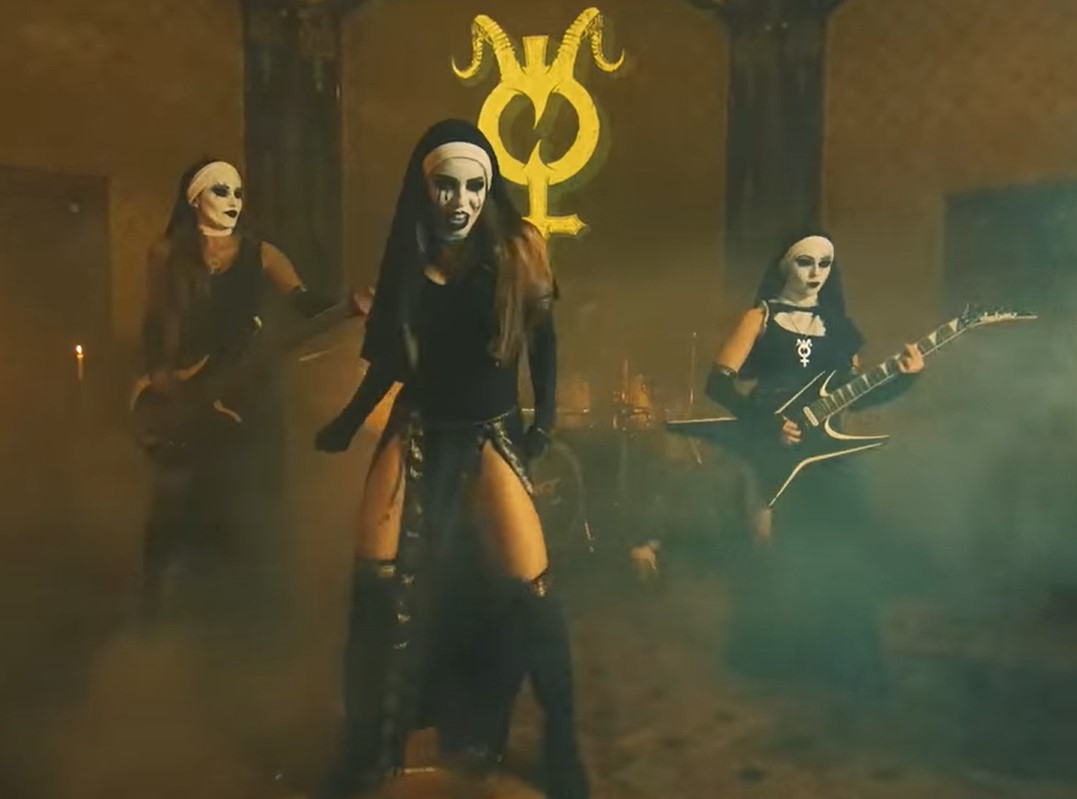 Shrouded in mystery, draped in black cloaks and corpse paint, this dark force known as DOGMA has risen. The four enigmatic nuns behind the hook-heavy, classic, power-inspired melodic metal use their music to propagate a powerfully anti-dogmatic idea of free thought. Their debut single, “Father I Have Sinned,” serves as the group’s official introduction to the world. The track’s stadium-ready riffs and anthemic choruses are in stark contrast to the group’s unearthly, gothic appearance. Is DOGMA a cult? A sect? Whatever they may be, they are here to take over.

“We are united but free,” notes the collective. “We want to detach people from dogmas and useless norms, which only anchor the life of each one instead of giving freedom. We do not preach anarchism, we preach true liberation. Nuns follow a god. They live without enjoyment and claim to abstain from sexual encounters. We subvert the iconography of nuns because they represent the exact opposite of what we preach. They are not free. Like many characters in the human race, they deprive themselves of the richness of a full life.”

More on DOGMA:
DOGMA beckons like a mythological siren calling all travelers adrift on the seas of conformity. Is DOGMA a band? A cult? A way of life? DOGMA is whatever the forces of nature demand — four women united by melody, ideology, and chaos, sharpening hard rock and metal into weapons.They possess an unapologetic reverence for human nature and independence. DOGMA adopts the monikers of powerful feminine entities – Lilith, Lamia, Nixe, Abrahel – embraced by diverse, ancient cultures. They draw upon legend to refashion the empty modern world, against the cruel rule of superstition. Wielding creative passion, empowered sensuality, and freedom, DOGMA stands in opposition to ignorance, institutions, dominion, and all suffocating limitations.
As a nun represents abstinence and repression, DOGMA champions unbridled desire and freedom, with theatricality as timeless as Kiss or Alice Cooper, and music as timely as The Pretty Reckless or In This Moment, DOGMA subverts all expectations with delicious vocal hooks, conceptually driven storytelling, and hard-charging heavy metal/hard rock anthems armed with big riffs and rhythm.For DOGMA, true blasphemy is to deny one’s self. They take furious aim at religious hypocrites and oppressive systems, summoning a cult of like-minded iconoclasts with songs of joyous rebellion. Sexuality without compulsion, speaking out without fear: DOGMA implores listeners to abandon the false reality of modern culture (with its deceitful posturing) and reclaim themselves. DOGMA demands nothing less than your full attention.
For merch, visit THIS LOCATION.

Stay tuned for additional missives on DOGMA to be unveiled in the weeks to come.