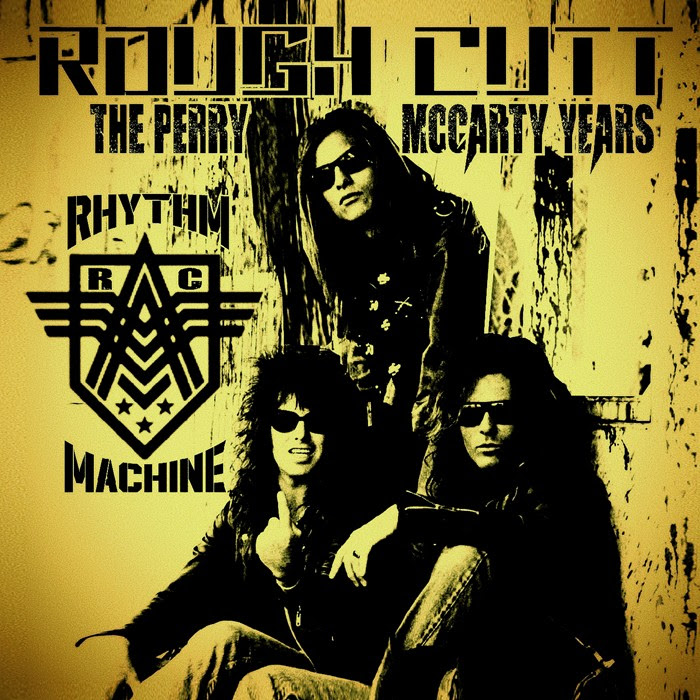 What was once lost has been found!

The history of Rough Cutt continues to unfold at the DDR Music Group with the release of ‘Rhythm Machine’ from THE PERRY MCCARTY YEARS.

Featuring ex Warrior and Atomic Playboys frontman and vocalist Parramore “Perry” McCarty, as well as founding members Amir Derakh and Matt Thorne, 17 songs have surfaced and are ready to explode in the listening device of your pleasure.

For those that may not know in 1987, Paul Shortino decided to leave Rough Cutt to join the multi-platinum recording artist Quiet Riot. This left Rough Cutt looking for a new frontman in order to move forward. After a nationwide search for a new vocalist, the band decided Perry was their man and they entered the studio with Ronnie James Dio (who recorded and produced the first three cuts on the album “Dynamite”, “Can’t Live Without It” and “Sex In Motion”) to forge ahead in a new direction.

According to Amir Derakh “When Paul left for Quiet Riot, we tried to pick up the pieces and change things up a bit. We enlisted Perry and took a shot at being a four-piece. These are all the recordings we made to shop to labels for a new deal. Some songs had a lot of potential, some not so much but we wanted the fans to be able to hear them all.”

This is definitely one for the history books for any fan of Rough Cutt and Perry McCarty. It was a short-lived time but one full of creativity, songwriting, and recording which would eventually see Matt and Amir move onto Jailhouse and Perry move onto joining Steve Stevens & The Atomic Playboys.

DDR would personally like to thank Paul Shortino who graciously gave us his blessing to release this album for the fans to hear and make no mistake about it; the big three consisting of Paul, Amir, and Matt have some more surprises up their sleeves in the near future.

Rough Cutt is alive and well with Paul at the helm and hopefully, by now you’ve picked up your copy of the ferocious new album “III”, if not, what are you waiting for? Grab a copy of the new Rough Cutt release as well as a lost gem from the vaults of Hollywood that many never knew existed.

This CD comes packaged in an 8-page booklet, is silver pressed, and is officially licensed from the band.

Get your copy today exclusively through the DDR Music Group.