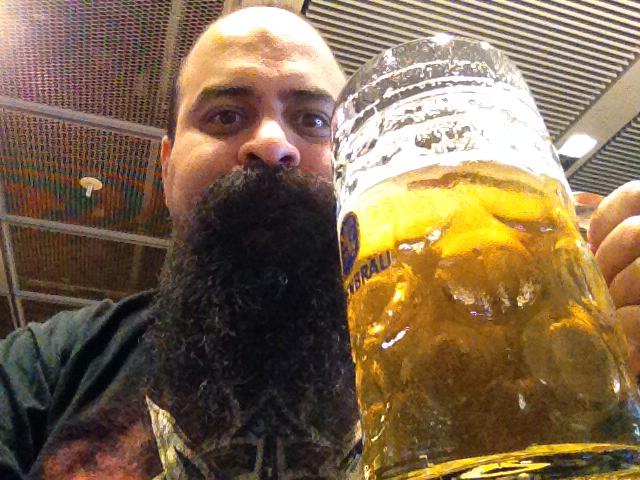 Often, I’m asked what it’s like backstage when I get to interview the artists. Many times the artists arrive at the venue with a very limited amount of time to get the equipment set up, do soundchecks and take the stage before they have to load everything up and start the process all over again. This interview is a prime example of what it often sounds like backstage. At various parts of the interview, you can hear the roadies doing a soundcheck and believe me it’s quite loud. But sometimes, that’s the only place and time that the artists can squeeze in an interview. I’ve been a big fan of Tony’s work in bands like Static-X, Fear Factory, Soulfly, Prong, Ministry and more. You’ll probably never meet a more genuine, down to earth entertainer than Tony Campos. Sorry for the background noise in this one but I hope you enjoy our interview with Tony!

Listen to the interview here:

I’ll admit that I was very skeptical when I heard that the original members of Static-X were going to tour and perform and tour to commemorate the 20th Anniversary of their debut album “Wisconsin Death Trip”.  I mean, how can you have a Static-X concert without the late frontman and founding member, Wayne Static?

In 2014, Wayne Static died in his sleep, accidentally of multiple prescription drug toxicity.  His death was a huge loss to the metal community.  Static-X was the frontrunners of bringing a new style of metal to the world along with bands like Korn, Slipknot, Disturbed and more.

Now, 5 years after his death, original members, bassist Tony Campos, guitarist Koichi Fukuda, and drummer Ken Jay have hit the touring circuit in memory of the late singer.  So how do you replace someone as charismatic and uniquely talented as Wayne Static?  The answer is “you don’t”.  And thankfully the band members of Static-X are also aware of this fact.

Enter the masked anonymous singer known as “Xer0”.  The character of “Xer0” is designed to look like what I refer to as “FrankenWayne”. A sort of Frankenstein-like character that resembles a sort of an undead Wayne Static, complete with visible skeletal and muscular tissue on the arms and legs. While I was unsure about this before I saw them live, I now consider this to be a brilliant and fitting memorial to the late frontman,  that I believe even he would approve of if it were possible.  Static always had a unique sense of humor and I honestly believe he would be happy with what the band has done.

There’s been a lot of buzz around who is behind the “Xer0” mask and I have my opinions about this as well, but to be honest, I don’t think it really matters who it is.  The fact is, “Xer0” does an excellent job of imitating both the vocal style and mannerism of the bands’ late singer and it feels like they have captured Wayne’s spirit.  I caught their sold-out show in Tampa Florida and it was amazing to see an audience of fans that had previously seen the band with Wayne and a whole new generation that was there enjoying the music that he created with “Xer0” at the helm.  Every artist wants to live forever and share their music with generation after generation and in this situation, it allows Static-X to carry on and keep this music alive along with Wayne’s memory.

While musically the focus was on the songs from “Wisconsin Death Trip”, the band made sure to play a sort of “Best Of” selection of Static-X fan favorites, spanning several albums.  I spoke with Tony Campos before the show and asked about his thoughts on everything.  He made it very clear that he had gotten permission and the blessing from Wayne’s family members before doing it and that he and the other band members were so excited to be able to play these songs together again because he honestly thought that they never would.  He spoke fondly of Wayne and hoped that the fans were enjoying this touring tribute. He also spoke about the new upcoming album called “Project ReGeneration” which will feature new Static-X songs featuring vocals from tracks that Wayne Static had previously recorded but had not used, along with guest vocalists to round out the release. During the show, the band kept Wayne’s image on a large screen visible for most of the night with song lyrics and album covers displaying the currently performed material. Tony Campos stopped the show briefly and spoke to the crowd and thanked everyone for coming out to honor the memory of the late vocalist and allowing the rest of the band the opportunity to perform for them again. The band had the audience on their feet and jumping up and down the entire night.  The crowd’s enthusiasm was easy to see and the energetic performance by Static-X was phenomenal.

Static-X is on their final leg of the tour and I highly recommend that you catch their show if they come anywhere near your city.  This is an incredible tribute and seeing the band perform these classic songs live brought back a lot of great memories for everyone involved, myself included.

Artist: Static-X
When: November 16, 2019
Where: Tampa, Florida
The Orpheum
Review by: Bobby Caughron