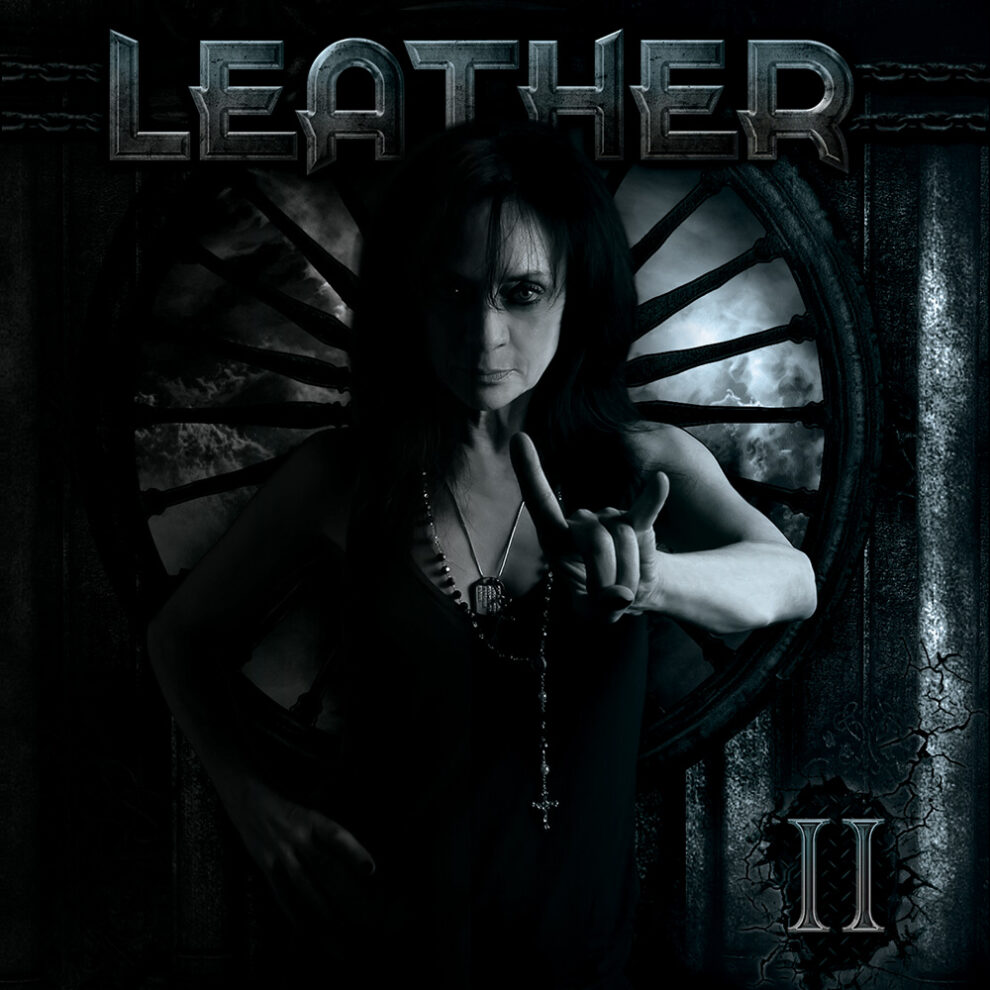 Chastain is the XSROCK Metal Artist Of The Month for November

If you haven’t heard their latest album. It’s a must have for all metal fans!

Leather Leone, metal vocalist extraordinaire, talked to us about all things Leather and Chastain.

XSROCK: Let’s start with the new album, “We Bleed Metal“. We recently reviewed it and our review stated that this is one of if not the best Chastain album so far. Tell me your thoughts about this album. Do you agree?

Leather Leone: I don’t get excited about a lot of stuff that I do, but I really like this album. (David) Chastain and I were just having a conversation and I actually agree with something he said, He said It’s hard to form an opinion on something we do until five or six years down the road. I usually make something and then just put it away because I hear the flaws in it, but the songs on this one and the energy that we had in the studio is really staying with me. Since, I’m still playing it in my car, I think it’s one of our best also.

XSROCK: What are your favorite tracks on the new album?

Leather Leone: Against All Of The Gods. I don’t why I love that song, but from the moment that he sent it to me and the moment that we started messing around with it, I really, really liked it. Don’t Trust Tomorrow is becoming one of my favorites too.

XSROCK: What do use for inspiration when writing lyrics?

Leather Leone: Actually, Chastain wrote everything on this album. He sent it to me and asked me if I liked it. I said, do I like it? I love it. I’m not touching anything.

Leather Leone: Chastain will not tour. Chastain has become a recording project.  It’s a really frustrating topic for me. I will be going out as Leather and doing some dates. I’ll be going back to Brazil this year and I’m going to play the Ragnarokkr Metal Apocalypse in Chicago in May. But no I can’t get Chastain out at all (laughs).

XSROCK: In light of the recent terrorist attacks including a rock concert in France, Do you have concerns about touring abroad?

Leather Leone: Absolutely not! That was a really horrible situation but I think that’s the world that we live in today, unfortunately. I don’t really live my life that way. I’m not really sure what my beliefs are but I do believe we have that time card that we punch and when your time is up, your time is up. No I don’t think about it at all. I try to be careful, but I don’t live my life that way at all.

XSROCK: This is your second album after returning to Chastain. Can you tell me what prompted you to leave Chastain and what made you inspired to return?

Leather Leone: Yeah. I did not leave Chastain. That terminology is incorrect. David and I didn’t have any blow out fight or I didn’t say “Screw you”, I’m out of here. He says that we were burned out, but I don’t really remember it that way. The shows weren’t getting any larger and my understanding and his understanding are different. I wanted to carry on touring in a larger and bigger way and I thought that we were getting opportunities to do that and he didn’t want to do that so it’s kind of this foggy thing, but no, it was no big deal, it was really amicable.

XSROCK: You seemed to just vanish from the music scene after releasing your solo album, Shock Waves, which was a great album. What did you do during that time?

Leather Leone: In my mind I said that I was going to put Chastain to bed for a while and go out and explore and start a new band in six months or so, but that never happened. I never could find a team of people that wanted to support me as Leather. They wanted to change me. I’m not a pop girl or a rock girl. So I didn’t compromise and I feel okay about it. I just went away for a while. I stopped going to shows and stopped listening to bands and I got into animal medicine and became a vet tech. The only reason that I considered coming back was when we lost Ronnie James Dio. It made me think what am I doing? I’ve got a talent for this so maybe I shouldn’t be wasting it. I’m not sure if it’ll keep going, but for now I’m having one hell of a time.

XSROCK: I like the duet that you recorded recently with Veronica Freeman from Benedictum. Can you tell me a little about that?

Leather Leone: Veronica and I became friends somewhere around 2011 or 2012. She was brought to my attention from a friend in Vegas that told me that you’ve got to hear her, she sounds just like you. So I started listening to her and she doesn’t sound anything like me. She’s incredible. She’s got her own thing going on. We stayed in touch and she approached me about doing the song. It was a lot of fun.

XSROCK: I’ve always thought David Chastain has never gotten the recognition that he deserves as a guitar virtuoso. Do you think it’s because he plays a much heavier form of metal than some of the guys that are always listed as guitar gods?

Leather Leone: No. My opinion of it is. He doesn’t care. Chastain makes music that he likes and does what makes him happy. He doesn’t cater to anyone and what’s important to him is being able to create and write his own music. I had a conversation with him about his music. It’s all kind of in the same genre, but yet, there’s something really unique about it.

XSROCK: Tell me a little about working with David. What’s the process when writing an album together?

Leather Leone: The process of working with David Chastain? (laughs) Well, he probably says that I give him ulcers. As you can probably tell, I do everything at like a thousand miles an hour and Chastain is more reserved, very polite, very neat, very clean. He has this great musical education that he comes from and I do everything by ear. And I’m always chewing and popping my gum and I have to do the tracks over. I’m eating nuts and blow everything all over the wind screen. I tend to get really frustrated because he’s such a perfectionist and he’ll go again, and again, that’s sharp or that’s flat. We have a lot of fun, though. I’ll get mad and throw one of my hissy fits and he’ll turn everything off and say okay, I’ll give you a minute. Another thing about this new record, it came together really quickly. When I heard it, it just came naturally and I think it was All Hail The King and maybe Don’t Trust Tomorrow, he said Wow! That’s the fastest and right on harmony you’ve ever done.

XSROCK: What are your musical influences? Do you like any of the current crop of metal bands out there?

Leather Leone:  Ronnie James Dio. You don’t need to go any further. When I was a teenager I listened to a lot of arena rock Fleetwood Mac, Boston, Elton John, and Ambrosia. I was a really late bloomer to metal. But then I got into Jimi Hendrix, Foreigner and Triumph. Rick from Triumph would just blow me away that he could sing like that. And then I moved to California, and then I got into Sabbath. Heaven and Hell and I met Ronnie (Dio) around the Holy Diver time period. I got into the (Rob) Halford, (Geoff) Tate and (Bruce) Dickinson. I’m a huge Dickinson fan. Dickinson and Dio are the two that really do it for me. And moving to California when I did, I liked the glam rock scene, but I was getting a band together and learning how to do this alongside thrash bands like Metallica, Exodus and Megadeth. I had to figure it all out and here I was this little chick. I was actually opening for Megadeth and the stuff that I got thrown at me (laughs). I forget that it was like that in the 80’s. There wasn’t that many girls in bands. It was me, Doro and Betsy from Bitch. You know who’s good? Lzzy Hale of Halestorm. She’s the singer from fuckin’ hell. I remember hearing her do a cover of Slave To The Grind by Skid Row and going What the Fuck?!  She’s incredible.

XSROCK: Tell me about the Sledge Leather project. Are you going to continue creating music together or is all of your time and energy focused on Chastain these days?

Leather Leone: I don’t see anything happening there. That was a moment in time. I’m really proud of it, but I don’t see anything happening there in the future. I’m not even sure if we’ll even do another Chastain record. I don’t know what the future holds for me just yet. But, I’m going to do everything that I want before I hit the dirt. I’ll be doing Chastain material live when performing as Leather. David Chastain is very supportive of that and he helps me out and he’s proud of me performing those songs live. He just prefers to stay back and record and not tour live.

XSROCK: For anyone that doesn’t know you, what would they be surprised to know about you?

Leather Leone: That I’m a very normal, happy person (laughs). I don’t go out and slay dragons or anything. A lot of people think that because I sing that way, I’m like a whiskey drinkin’, smokin’ truck driver or something. There’s nothing unique about me. I’m just a normal person who likes metal. I like all of those dark gothic images, but it’s not what my life is really about. I enjoy it for sure, though.

XSROCK: Is there anything that you’d like to say to our readers at XSROCK and all of the Chastain and Leather fans out there?

Leather Leone:  I would like to say love and Dio as I always say. Thank you so much for your continued support. Your trust and your loyalty mean everything to me. I hope to continually please you guys. Look for me I will be out on the road next year. I fuckin’ love you guys. I love everybody and I love life!

We Bleed Metal at Leviathan Records