XS ROCK: So tell me about your great new album “He Saw It Comin”. I just did a review on it recently and in my opinion, it’s some of the best material that you’ve ever done. Does the title reference your exit from Great White several years ago?

Jack: No. Actually, when I was six years old, I knew that I wanted to be a rock singer. When I was five, I was really interested in dinosaurs and archaeology. I wanted to be an archaeologist and dig up ancient remains, rocks and so forth, but on my sixth birthday, my parents bought me a record player. I still remember what it looks like to this day, really vividly.  My parents bought me the Beatles album Help! I remember taking it out of the record sleeve and seeing it was Capitol Records with the rainbow design and it was funny, because I eventually ended up on Capitol. So, I put the record on and the next thing I know, I had this, like God experience, an epiphany I guess, but I hate that word. It was like this overwhelming feeling that at six years old, it really freaks it you out because you don’t understand it. All of a sudden I knew what my life was going to be.  I knew from that point on, I knew I was going to be a successful musician. I knew it. It was like a gift of future sight. It was so weird. It wasn’t like a dream or hope. I knew it like I knew the sun would come up the next morning. I would tell my friends about it, and they’d say “yeah, right” you’re just a bum, you’re not going to do anything with your life. I mean I had a lot of really bad experiences that should have prevented me from getting there. But, I did. I remember selling out the Los Angeles Forum, the biggest arena in L.A., like 18,000 people. The crowd was going wild and Bobby Blotzer from Ratt came out and stage and they presented me with my first platinum album. It was like that Foreigner song, Juke Box Hero. I remember that the night before, we were staying at a hotel across the street and I opened the curtains up and there was the Forum all lit up and I was like “Holy Shit” we’re playing there tomorrow and it’s sold out. I remember when I saw my first concert. It was at the forum. It was Blue Oyster Cult, Be-Bop Deluxe and Angel. Man, I could really have given two poops about the other two bands, but when B.O.C. came on it was so amazing. Eric Bloom had these lasers built into his suit. It was really, really cool. When we did our sound check for our show I went out to the same area that I was sitting for my first concert and I sat there and looked at the stage and thought to myself, wow, you’ve come along way. I guess, I did, about 200 feet. ha ha ha.

XS ROCK: Prior to Great White, you and Mark Kendall were in several bands including Dante Fox, before settling on Great White as the name. Can you tell me a little about those early days?

Jack: Yeah, actually we started out as a band called Highway. And then it became Wired and then Dante Fox and then finally Great White. That’s from my love of sharks and I also used to call Mark Kendall that because he’s you know, almost albino. I would announce him as Mark Kendall “The Great White”. We changed the name to Great White because the record label wanted us to change our name. I thought Great White was a stupid name, even though I love sharks, but it was either that or make a record that would only reach about 500 people. So you know, ha ha ha

XS ROCK: How have you kept Robby Lochner a secret? That’s guy’s an amazing guitarist.

Jack: Yeah. He’s a great player. He was in a lot of bands in and around Tucson and has played with some great people. 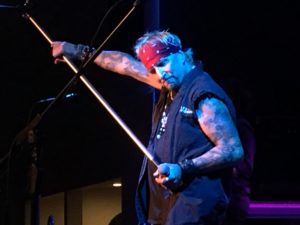 Jack: Well, you know, I’ve always tried to write auto-biographically. And this time I tried to be really introspective. It’s kind of like therapy for me. It’s like having the world’s largest psychiatric firm. Totally cathartic. I don’t have to get any answers back, it’s just the fact that I can talk about it. That helps me get stuff off of my chest. It helps a lot. This record was just a real as anything.

XS ROCK: So now that the split between you and Great White has occurred, after all the dust has settled, if at some point they wanted to reunite the original lineup again would you ever consider it?

Jack: Oh, I’d consider it. I’d consider that I’m never going to go back. The thing that I can’t ever get over, I’m the kind of guy that doesn’t hold a grudge. I’m not mad at them that they don’t want to play with me, because it was my fault. I mean, I kept canceling tours and everything else. When it comes down to it, it’s all about the money. Friendship goes out window when money is involved. But the one thing I just can’t ever get over, is that no one told me. I kept calling them and nobody called me back. And they went and filed for the trademark without me knowing it. So, nobody called me. I would have much rather had someone call me and say, “Look dude, we’re really mad at you and we don’t want to play in a band with you anymore. To be such pussies about it, pardon the word there, wimps, whatever…to not have the cojones’ to call me up and say we don’t trust that you’ll say sober and we don’t play with you. And, that would have been more man-style. It shouldn’t surprise me. Every time we fired someone in the band, I always had to be the one do it. But when it came to me, no one would step up and do that.

XS ROCK: So have you ever listened to them perform with Terry Ilous on vocals?

Jack: Terry? Yeah. I’m not a huge fan, but not because he replaced me in Great White. At the time, it was a good thing because I was very sick. At least they could have gotten someone who could try to emulate me more. My voice is in a range that’s pretty close to Robert Plant’s. I’ve changed my warm-ups and it really makes a difference to my voice.

XS ROCK: It’s no secret that you’ve had your share of health issues over recent years. You looked really energetic and like you were having fun at the live shows. How’s your health these days?

Jack: My health? Oh, yeah, it’s good. I have a little high blood pressure but, it’s all good.

XS ROCK: You’ve struggled with sobriety for many years, how’s that going now?

Jack: Well, the doctor told me that If I ever drink again I will die. It’s been about a year and a half now that I was in a coma. I woke up out of that five day coma and there was all of these people there, my manager, his wife, my guitarist, a friend of mine from Chicago and I had no idea what was going on. The doctor told me that my liver almost completely shut down. You almost died. And I was like “Again?” because that was my second several day coma like that. He said, you’re in septic shock and your whole body’s poisoned. He said, I’ve heard that you’re some kind of celebrity. Personally, I don’t know who you are, but I’m going to tell you the truth, if you drink again you’re going die. What you’re doing is stupid. If you want to commit suicide that’s up to you, but if I hear your name in the paper, I’ll feel bad, but I’ll also be really upset because I told this guy. I just said ” I don’t want to leave my wife a widow and I don’t leave my fans without at least another album and some shows.

XS ROCK: Great White was one of the original bands that ruled the 80’s rock, sunset strip scene. How was the competition between your band and other bands at the time?

Jack: It wasn’t really a competition back in those days. We were all buddies. We’d be driving around Sunset Blvd. putting our flyers on telephone poles and I’d look back two blocks behind and there would be Nikki Sixx covering our flyers with his.  So, we’d have to go back around and do the same thing again. ha ha ha. It was funny. We’d all hang out and go to each others shows and stuff.

XS ROCK: Who were your musical influences when you were growing up?

Jack: The Beach Boys, Dion, Led Zeppelin, Steven Tyler, Ian Gillan. Alice Cooper. I used to dress like Alice Cooper. I’d go to school with my eyes painted up like Alice. People were freaked the hell out. They were like “What’s wrong with this guy?”

XS ROCK: What would you say is your greatest achievement so far?

Jack: Vindicating my father. Because his friends used to always tell him that your son’s just a drug addict and he’s never going to go very far. My Dad would say, “No, He’s going to be a rock star, just wait and see”.  Then we played Irvine Meadows and it was sold out. I got a limo for my Dad. I remember being on stage and I turned around and there’s this sea of people and I saw my Dad there against the wall watching. He always believed in me. He never stopped believing.

XS ROCK: Well Jack, it’s been a pleasure to talk with you today. Keep on rockin’ and the best of luck with the new album and tour.

Jack: Right on man. That means a lot to me. Thank you so much! We’ll talk again. 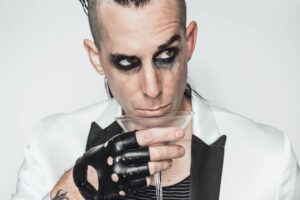