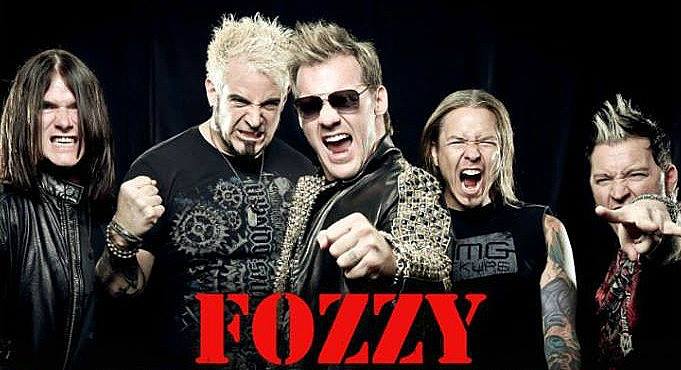 Today I sat down with Chris Jericho. Pro wrestler, rock singer, writer, podcaster and the list goes on and on. Chris is a multi-talented guy and was great to interview. We talked about his latest album, Judas by his band “Fozzy”, which is spectacular, by the way. We also talked about a few heavy subjects like terrorism, politics, religion and world chaos. Check out the interview below as Chris updates XS ROCK on his latest happenings.

XS ROCK: So let’s start out by finding out the answer to a question that I’ve wondered about for a while.
Why the hell did you decide to call your band Fozzy?

Chris: Yeah man, It’s funny. The thing with Fozzy is it’s the easiest band name to chant ever. In a world where there’s a Def Leppard, a Duran Duran and Red Hot Chili Peppers, Metallica and KISS. All of those bands names are just part of the lexicon, but if you think of those band names and just the name alone, they’re dumb names. Def Leppard? Okay, so that’s like my band is named Sick Cougar. Or I’m going to put together a band called Hugg like Kiss or like Korn, only Karrot with a “K”. A band name is a band name. You can analyze it or poke fun at it but at the end of the day, it represents you when you play. In between all of our songs, every night, all you hear is Fozzy chants and I don’t hear that at any other concert for any other band, between every song. So in retrospect, I actually like our name. It’s pretty damn cool. We started as a cover band called Fozzy Osbourne and then we started playing more seriously and we dropped the Osbourne, stuck with Fozzy and that was it.

XS ROCK: So I’ve had the chance to listen to the new album “Judas” and it’s some of the best material you guys have ever done. Can you tell me about recording this album?

Chris: It’s always good to hear that. When you put together a record and spend nearly two years working on it. You make a record for yourself and if you’re happy with it, then you don’t really care what people think. But, outside of that, you do care what people think. Now that people are hearing it and it’s getting airplay, people are saying what you just said. Best Fozzy record ever and album of the year, classic, all of the things that I’ve been hearing is really gratifying. We did the recording a little bit differently this time. We had the producer John Andrews and we decided that we’d give Johnny full control over the record and whatever he says goes. We’ve never done that before. It’s a little like when Metallica worked with Bob Rock on the Black Album and KISS worked with Bob Ezrin on Destroyer. It’s a little bit hard to give those reigns of control, you think you know best because your the guy that’s been doing this the whole time. But we realized that if we wanted to get to the next level, we needed to have that influence of the third party, helping us to decide that this is good, this is bad and really helping us to develop our songwriting. Focusing on the chords, chorus and the melodies and not worrying about if the song has a guitar solo or not. As a result, we have an album that has 11 songs on it that, I think, every one of them could be a single.

XS ROCK: “Drinkin’ With Jesus” is getting a lot of positive response. How did you come up with that song?

Chris: That’s one of Johnny’s songs. Johnny’s kind of a dark guy sometimes. Before this one, I was the chief lyricist for every other Fozzy record. When I got those lyrics, I had to think about what does this song mean to me. What is this? Drinkin’ With Jesus” is basically slang for drinking by yourself. It’s like an updated version of George Thorogood’s “I Drink Alone”. You know, the guy has no friends or he’s alienated a bunch of people, not the most popular guy, so he sits down and has a couple of drinks with Jesus becuase that’s the only person that’s around me right now. Once I was able to crack that code of what it was about, I was able to drop into and really sing it. Everybody has had that feeling at one time or another of being alone. Your friends are all busy, or out of town, all married or have girlfriends or whatever and you’re just there drinking by myself. People love it. I wanted it to be second on the record and the second single released. After Judas was out for about 5 months or so, I wanted something different to represent the next song on the album. Something that kind of slaps you in the face. You know, great guitar parts, AC/DC meets The Cult or something. I’m really happy with how it came out. It’s kind of song that you drive down the highway at night listening to.

XS ROCK: After recent tragedies in concerts in Paris, London and now the biggest mass shooting in U.S. history, in Las Vegas…what’s wrong with America? Not to get too political, but what do you think we need to do as a country to deal with our vast differences?

Chris: Dude, I don’t know, man. When stuff like that happens, there really is no rhyme or reason behind it and it seems to be happening with more and more frequency. I don’t know. I don’t know what the problem is. I mean, it’s almost like, if you wanted to get biblical with it, you know it’s like we’re nearing this age where, if you’re a religious person, Jesus is going to come down and say “Alright, you’ve guys have had enough”.  We just do the best we can. We put out a great record that people can listen to and maybe forget about all of the bullshit that’s going on. When we come to your town, we’ll play some awesome rock n’ roll for you and you can try to leave your worries at the door for a couple of hours. I think as entertainers that’s all we can do. It’s not about getting political or religious or anything. I really don’t care what your religion is or your political affiliation, everyone’s welcome at a Fozzy concert. When you go to a concert have a good time and enjoy yourself and try to forget about all of this shit, if you can. Life is short man.  Like you saw with Tom Pety a few days ago. He’s alive  and then suddenly he’s dead. He was one of the most legendary song writers of all time. In the short time that we’re given, I’m trying to do the best that I can to entertain everyone that believes in me, whether it’s with Fozzy,, wrestling, or podcasting or whatever. I take great pride in trying to give people a little lift when the come out to our shows. I will never have a job at a bank. This is what I’ve been doing since I was 19. And whether I live to be 80 or 100 years old, I’ll still be doing some sort of entertaining somewhere. Even if it’s telling vaudeville jokes at the old folks home.

XS ROCK: Does terrorism enter your mind now, when you take to the stage after everything that’s been happening?

Chris: We were over in Europe when the Bataclan attack took place. We were in the Netherlands which is only about 300 miles from Paris and we had a show exactly one week later in Paris. A lot of bands were canceling and went home. We thought about it, but we decided “Fuck it” we’re not going to go anywhere. We’ll do a show in Paris, if 2 people show up, those 2 people will get a rock n’ roll show. We only had around a 100 to 150 people, but those people needed some diversion. I’ll tell you, I was watching the back door the whole time. We had a minute of noise, instead of a minute of silence for the victims. We did a minute of noise because it was a rock n’ roll show. But, it is something that you think about and it can happen at any time.

XS ROCK: Speaking of politics, The Rock has indicated that he would consider running for President of the United States. Is politics a forum that you would ever consider being involved with?

XS ROCK: Most people have come to know you as Chris Jericho the pro wrestler first, and then band frontman later. Is rock music something that you’ve always had an interest in?

Chris: Yeah. I’ve been in bands since I was 13. When I was a kid I wanted to be in a rock band and I wanted to be a wrestler. those were my two goals. I spent the rest of my life focusing on those careers and not caring what anybody else said.  Sometimes people have a problem with Fozzy because I’m the singer. Every band has a gimmick, whether it’s KISS with the makeup or Slipknot with the masks. All of that’s fine and dandy, but what happens when the gimmick wears off? It’s either good or it’s not good. So okay, I know I’m a great singer, I know I can write great rock songs and you just have to go out there and keep putting n good shows. After a while all of the haters become supporters. That’s just the way it goes. Sometimes you have to work twice as hard to get people’s respect, but once you get it, you’ve got it for life and that’s a good place to be.

XS ROCK: Do you find many similarities between wrestling and rock n’ roll?

Chris: Absolutely. They’re both very aggressive forms of entertainment, high energy, both very dependent on the reaction that you’re getting from the crowd. I always wanted to be the ultimate frontman of wrestling. I wanted to be the Paul Stanley of wrestling. When I started Fozzy, I took all of those characteristics that I had in wrestling and brought them back to Fozzy. So it’s all very symbiotic, all based on connecting with the audience and putting on a great show.

XS ROCK: What are you most proud of from your wrestling career, your music career and personally?

Chris: To be honest with you, the fact that I’ve been able to do what I wanted to do as a kid at high levels and do it for 27 years now.  I’ve done wrestling and rock concerts in front of crowds as small as 8 people and as large as 80,00 people, but I’ve enjoyed every one of them exactly the same. It’s the old saying of “If you enjoy what you do,  you’ll never work another day in your life” I’m happy to be doing what I’m doing and I’m not going to stop doing it. And, I appreciate everyone that has allowed me to be able to do it.