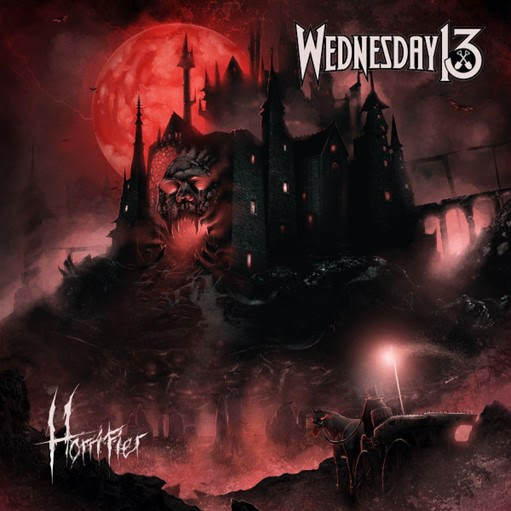 Heavy horror punk icon WEDNESDAY 13 has slithered his way to the top of the horrendous heights of rock, punk and metal with his electrifying solo music and as front man of renowned horror punk supergroup Murderdolls, amassing a colossal cult-following along the way.

On October 7, 2022, the undisputed harbinger of metal horror returns, following up on 2019’s acclaimed Necrophaze (#2 US Heatseekers) with ‘Horrifier’ – a brand new slathering of 11 terrifyingly grim and groovy anthems to get blood pumping and brains melting!

Showcasing a blend of styles plucked from the band’s 20-year career, Horrifier weaves an underlying sonic thread reminiscent of WEDNESDAY 13’s roots – a raucous blend of ballistic metal and macabre heavy rock that’ll have new and diehard fans alike ascending from the depths. As always, various tracks on the album are inspired by classic horror flicks, this time circling cult-favorite slasher John Carpenter’s Halloween and the iconic Christine supernatural thrillers.

Today, get a first listen to Horrifier with the album’s first single, “You’re so Hideous”, out now and accompanied by an Exorcist inspired official music video! The track stuns with danceable 90s sonic flavor, a sing-a-long chorus and an unforgettable lead riff that is sure to be heard at venues this fall!

WEDNESDAY 13 says about “You’re so Hideous”:

“’You’re so Hideous’ is such a catchy track and it’s one of the very first ones I wrote for the album. Lyrically, it’s a modern day Medusa story… Beware the stare into her eyes. The music video was of course inspired by the Exorcist film and was a lot of fun recreating that.”

Watch the official video for “You’re so Hideous” HERE:

WEDNESDAY 13’s ninth full-length album kicks off with eerie introductory track “Severed” before careening into one of the band’s heaviest songs ever recorded, the massive, slow and low “Insides Out”, accented by hair-raising guitar leads and slithering vocals. The aggressive, industrial-edged “Exhume and Devour” and warning sing-a-long single “You’re so Hideous” pick up the pace with danceable 90s sonic vigor, while surefire hit “Good Day to Be a Bad Guy” aces the pure horror punk spirit of Murderdolls as a downright blissful tongue-in-cheek earworm that’ll seep into the listener’s head on repeat. John Carpenter’s Halloween inspired anthem “Return to Haddonfield” convinces with marching gang vocals and a searing metallic guitar solo before the pace picks up again on fast-riffing, mosh-ready title track “Horrifier”. Southern-fried metal tinged “Hell Is Coming” is one of the album’s best displays of stylistic versatility, accented by an impressively commanding vocal performance while pumping out a thrash-worthy breakdown and blues rock solo. “Halfway to the Grave” sees the band echoing 80s flavor accented by memorable leads and imploring lyrics before leading into the charging Christine themed album standout “Christine: Fury in the Night”, featuring pounding drums, an unforgettable hook and a transfixing guitar lead that quite literally drives. Horrifier closes with its most heartfelt track, “The Other Side” – a personal ode WEDNESDAY 13 penned about the sudden loss of his mother, as well as former Murderdolls bandmate Joey Jordison – but that also shines as a vital anthem made further pertinent after recent years of intense worldwide loss and reflection.

Horrifier was produced and recorded by WEDNESDAY 13 with mixing and mastering by Brent Clawson and features stunning album artwork by Jonny Bush. A dynamic journey into the 20-year career-spanning sound of WEDNESDAY 13, Horrifier revitalizes with something for every listener to latch onto – boasting intensely fun horror punk energy with gruesome metallic attitude!

“The last three releases have seen the band explore new ground with heavier songs, drums, and vocals. Coming out of the Covid crisis, I promised I would not release a sad, depressing record. I wanted to make a fun, horror themed rock record that would be reminiscent of the first few WEDNESDAY 13 records. The new album is a fun, fast-paced, thriller!”

9. Halfway to the Grave

10. Christine: Fury in the Night