LA-based post-punk four-piece Agender share a two-in-one video game-style video for synth-punk tracks “Trouble & Desire,” and “Womb 2 Wound” along with the release of their long-awaited sophomore album, No Nostalgia, out everywhere now. The queer band, made up of Australian lead singer Romy Hoffman, bassist Cristy Michel, drummer Christy Greenwood and synth player Sara Rivas makes schizo, synthy, paranoid, post-punk with a dash of dysmorphic desire and have been turning heads in the post-punk scene since their debut album in 2014, Fixations, and most recently for their 2022 single, “Top Bottom Top.” Coming this summer from the band is a remix EP, in collaboration with JD Samson and Harvey Sutherland.

“Trouble & Desire,” is a fast-paced, drum-backed track that meets where being anxious and avoidant in a relationship intersect. “Womb 2 Wound” builds on the bold tone as it opens opens with the classic assertiveness of Agender declaring, “Fuck my biological clock with my philosophical cock.” “It begins with a punch in the face. The face is that of expectation and time. The song is about a hyper-aware person striving to be an ego-less, body-less self, who can transcend pathology and their attachment to people and things. It’s a song that champions the notion that the solution to all problems is always spiritual.”

Like with much of the album, Hoffman wrote the tracks and plays everything on them from synths, to drum machines, guitar, including the lead vocals and even had a hand in their production with an assist from David Scott Stone (LCD Soundsystem, Get Hustle, Unwound).

Hoffman reveals the tracks are “probably the most unhinged, synth heavy, synth-punk jams on the album. They sit somewhere between the late 70’s minimal synth punk pioneer ‘The Normal’, early 80’s L.A synth punks Nervous Gender and the more modern sound of ‘The Faint’.” Describing their sounds, she continues, “Big synth lines and layers, twinkling guitars and a steady drum machine beat create a bed for vocals to protrude from. It’s all about the vocals. They’re urgent, they’re umph. Monotone over melody. Delivered with conviction.” Hoffman concludes, “The song sounds like what living with an attachment wound feels like. Like nothing is enough and everything is too much.”

The double video, directed by Amanda Lovejoy Street examines attachment styles and faces anxiety head on in the pursuit of finding oneself, playing on both sincerity and humor. Street, who has worked with American rock-punk band !!! Chk Chk Chk as well as the critically acclaimed short film Magic Bullet, explains, “Agender’s latest two for one video explores what an experimental video game on attachment styles might be. The first video follows lead singer Romy the “Dismissive ” as she tries to avoid being caught by Claire, the “Preoccupied”.

The second video, Street continues, “propels Romy into an abstract womb space aka the origin of her attachment style. We move between Romy navigating the smothering “wombs” and into a stylized relationship space where we see the attachment dynamic between her and Claire continue to play out – one where real intimacy is never achieved. George Haas from Mettagroup acts as a “therapist” to narrate and witness.” 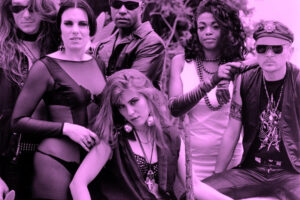