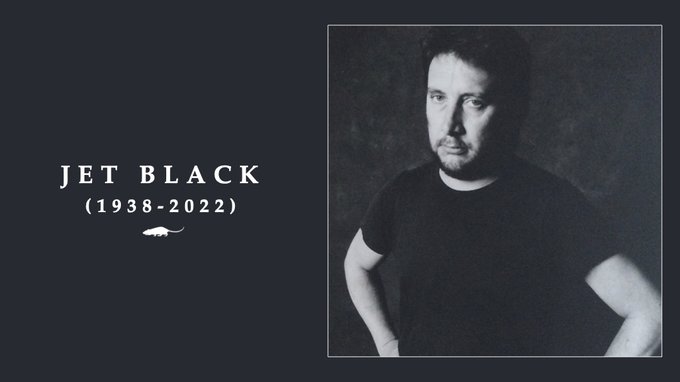 The Stranglers have announced that their original drummer, Jet Black (real name Brian Duffy) has passed away. He was one of the founding members of the band and played on what many consider to be the band’s greatest albums, Golden Brown, Peaches, and No More Heroes.

Then, there is a tribute post that goes into much more detail about Jet Black on the bands’ Official website at: https://thestranglers.co.uk/jet-black-rip/

Jet Black, drummer of The Stranglers has passed away peacefully aged 84.

As the ‘elder statesmen’ of the group, Jet was already a successful businessman in the Guildford area when The Stranglers formed in 1974. Jet owned a fleet of ice cream vans, one of which, as many fans will fondly remember, was used to tour the UK in the early years.  Jet also owned an off licence, the upstairs apartment of which doubled as ‘Stranglers HQ’ in the early days.

Jet retired from performing live with The Stranglers in 2015 having suffered with respiratory health issues since childhood. Despite difficulties in performing towards the end of his career, Jet’s charismatic charm resonated with fans who would endlessly chant his name as he took his place at the drums.

As a drummer in jazz bands during the 60s, Jet’s playing style helped shape The Stranglers’ unique sound.

On reaction to the news, bassist and co-frontman JJ Burnel said “The welcoming committee has doubled. After years of ill health Jet has finally been released. He was a force of nature. An inspiration. The Stranglers would not have been if it wasn’t for him. The most erudite of men. A rebel with many causes. Say hi to Dave for me.”

Sil Willcox, the bands manager added “He was the Jet force that launched the Stranglers. He was the Jet force that powered the bands determination to get heard and get noticed. Jet Black was the real deal. Astute in business, a talented drummer and an obsessive perfectionist. These are only a few of the talents of the man whom I was privileged to have as my mentor and my dear friend. I will cherish the times we planned, pranked, ate, drank and laughed on so many great nights together.”

Jet had a multitude of other achievements. From writing two published books that documented The Stranglers’ notorious 1980 arrest in Nice after allegedly inciting a riot, to even designing a patented bass drum pedal. He will also be remembered for his skill in crafting bespoke furniture and his accomplishments as a chef.

Baz Warne, the band’s guitarist and co-frontman said of him “I loved Jet. He took me under his wing over two decades ago and I never really came out from under it. I’m so very sad he’s gone. He hadn’t been too well for a while, but when I spoke to him most recently, three weeks ago, he was laughing and wanting to hear all the news…still interested and involved. It’s been my privilege to have known and worked with him, and to have called him a friend, and I’ll miss him until the end of my days.  Rest in peace big man.”

In recent years, various health issues had become more debilitating, and Jet had been residing quietly in his country home in North Wales, close to his family and friends.

Jet leaves behind his wife Ava, also his two children Charlotte and Anthony.

In this article:jet black, punk, the stranglers