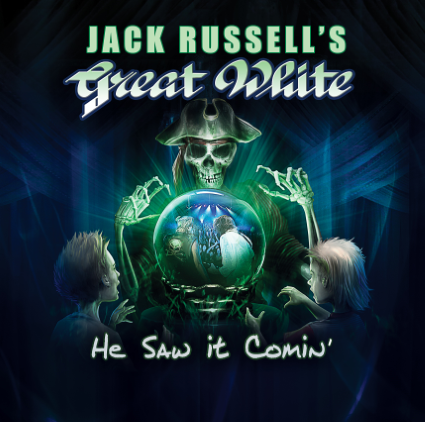 Review:
The break up between the original members of Great White, which saw Great White carry on with new singer (Terry Ilous Ex-XYZ) and longtime vocalist Jack Russell start his own band, known as Jack Russell’s Great White has been well documented and publicized in recent years. Great White released their first studio album without Jack Russell at the helm called “Elation” to mixed reviews in 2012. Now, Jack Russell’s Great White have unleashed their first studio album entitled “He Saw It Comin’ which comes out January 27, 2017. So, how is it you might ask? Well, I have to tell you that I am simply blown away by this album. This is some of the best material that Jack Russell has created since the “Once Bitten” days. No offense to his former band members, but this sounds like the Great White that I’ve known a loved for so many years. What’s really impressive about this album is that Jack and the band have forged new territory musically without losing that signature sound. It’s as if Jack went back in time, picked up the pieces where Great White had the most success and started from there. “Sign of the Times” kicks this release off and it’s an instant classic track. Jack’s band is a well oiled machine with a great sound. I think that’s one of the great things about this album, it sounds fresh and the band sounds energetic and invigorated. Next up we have “She Moves Me” a funky bluesy number which has a real swagger to it. “Crazy” continues this trend with a little more upbeat tempo and a fun vibe. With “Love Don’t Live Here” they slow things down a bit, not quite a ballad, it tells a story in a memorable song that is extremely catchy. “My Addiction” seems to be Jack’s account of his own past problems with substance abuse. Much of this album seems like a really personal account of things that Russell wants to get off of his chest. With He Saw It Comin’, Jack’s created a personal form of expression that comes through in the material and adds some extra fire to these tracks. “Anything For You” is simply a beautiful love ballad. Another personal track, no doubt written for someone special. The title track of the album is a bluesy, bouncing number that has a little bit of a moodier tone to it and with the vocal harmonies, reminds me of a classic “Queen” track. “Don’t Let Me Go” has a bit of a Jamaican feel to it a times and would be a great song to relax to on the beach somewhere. With the intro of Spy vs. Spy you get a taste of the incredible talent of guitarist Robby Lochner. The rest of the track is a straight ahead rocker with a slight darkness to it. “Blame It On The Night” is a classic Great White era sounding track that holds it’s own in the long and storied history of Jack Russell’s contributions. It’s also one of my favorite tracks along with “Sign Of The Times”. The album closes out with a fun little ditty called “Godspeed”. Which is not at all what I expected given the title, but it’s an amusing and fun album closer along the lines of “Happy Trails” on Diver Down by the almighty Van Halen.  Jack Russell recently stated that he has been completely sober for the last year and half.  This album is an incredible testament to the determination and hard work of Jack and his band. Like I said earlier, this is without a doubt the best material that Jack has produced in years. This lineup has the chemistry and talent to take it all to the next level. By the way, If you get a chance to see them live, they are simply spectacular. I wrote a live review of their performance a few months ago that you can read right here.. If you love great sounding classic rock and roll, you need to pick up Jack Russell’s Great White‘s new album “He Saw It Comin’ “.  It’s destined to be one of the best rock albums of 2017.