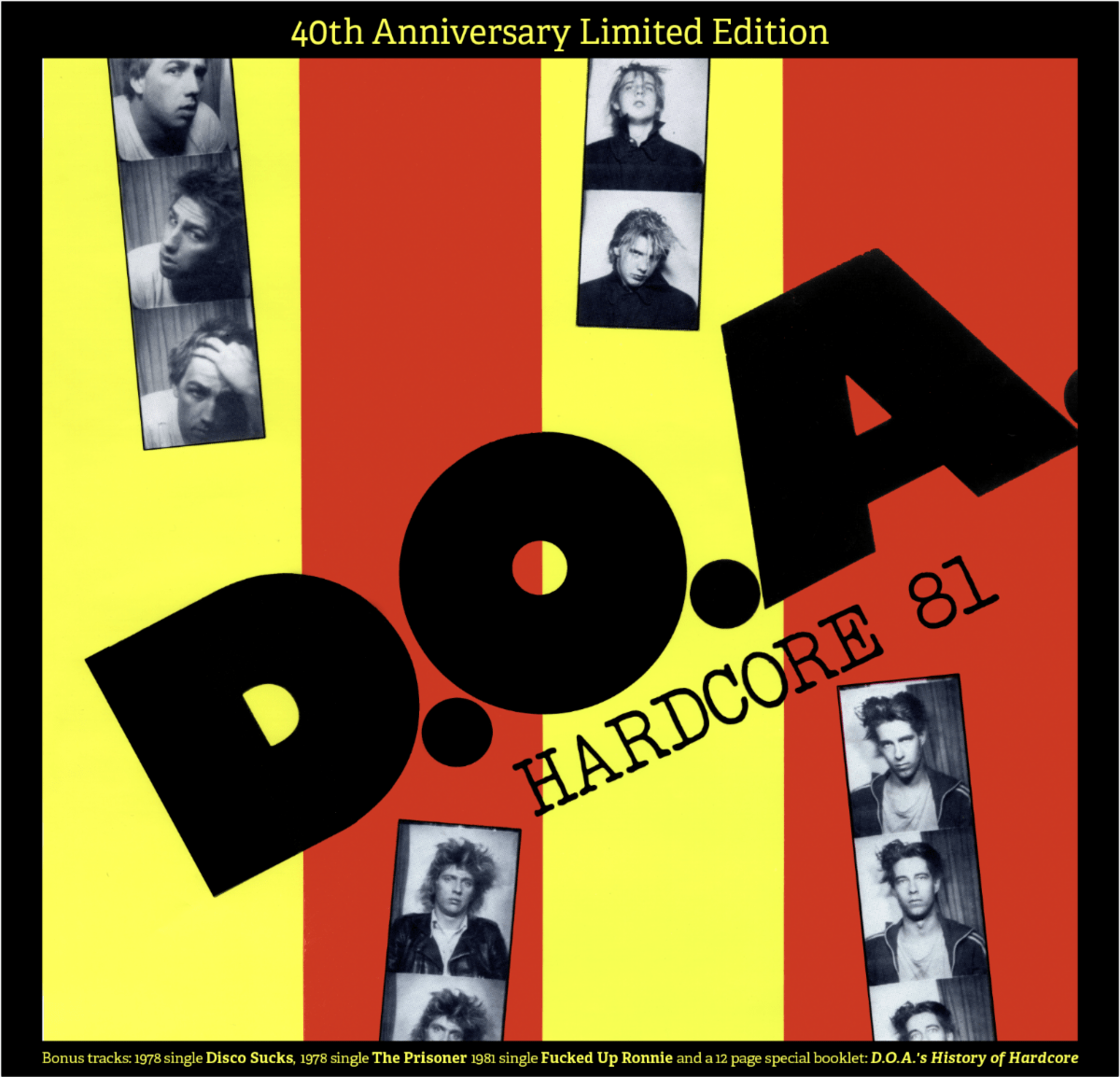 It’s time for some wild and riotous shows, D.O.A., the Men of Action are ready to head out on tour. After two years of almost no shows, the band has 15 shows booked in April and May. In April they intend to take the US West Coast by storm with 12 shows where they will play Hardcore 81 in it’s entirety.

That raging slab of vinyl was the start of Hardcore punk and Sudden Death has re-released it with three bonus tracks and a 12 page booklet: D.O.A.’s “History of Hardcore” written by Joey Shithead.

D.O.A.’s second album Hardcore ’81 was thought by many to have been the first actual reference to the second wave of the American punk sound as hardcore… But this is the second coming of the Joey Shithead Throbblehead!

Since 2009, AGGRONAUTIX has developed and produced over 50 Throbbleheads, almost all of which have sold out (see entire list HERE). They’ve worked with legendary artists such as DEVO, The Descendents, Rancid, Bad Religion, NOFX, The Damned, Roky Erickson, Dead Kennedys, GWAR, J Mascis, and many others.

D.O.A. was formed amidst a whirlwind of controversy and upheaval. In 1978, three guys fresh out of high school from the backwaters of Canada’s suburbs heard about the punk rock revolution. In February of that same year the band formed and started playing shows. They soon realized that there were no record deals coming in any time soon.

Keithley (aka Joey Shithead) who was working towards being a civil rights lawyer before he found punk rock, concluded that the band had to take the “do it yourself” approach long before DIY became a popular concept. He formed a fledging record label called Sudden Death Records and the label released D.O.A.’s first snarling slab of vinyl, the Disco Sucks 7″ EP.
﻿
Disco Sucks soon became an underground hit and the band started touring from Vancouver to their newly adopted “home base” of California five to six times a year. In 1980, Keithley coined the term “hardcore” and the band soon released their landmark album Hardcore 81. The album became a hit, the hardcore movement took off, and D.O.A. pushed that expression into common vernacular.

Over the last four decades, D.O.A. have released 18 studio albums, sold over a million albums, and played 4,500 shows on five different continents. The band’s albums, shows, and attitude have won over three generations of fans and influenced the likes of Green Day, Nirvana, Offspring, Henry Rollins, David Grohl and The Red Hot Chilli peppers, to name a few. Keithley has also written two books: I Shithead: A Life in Punk and TALK – ACTION = 0.

From day one, D.O.A. has helped organize and lead hundreds of benefit concerts and protests for good and just causes like environmental issues, women’s rights, food bank benefits, First Nations rights and they have organized and stood against war, racism and weapons proliferation, amongst others.

Keithley has been called a cultural politician, trying to change the world from outside the system. Well my friends, Joe got elected in October 2018 as a city councillor in his home town of Burnaby (one of the largest cities on the west coast of Canada). Joe ran as a Green and is now changing the system from the inside. He has worked to provide affordable housing, helping the disadvantaged. In other words, changing the system from the inside. Noted film maker Scott Crawford (Salad Days and Boy Howdy) is documenting Joe’s journey through politics and music, with a release of the film in 2022, the year when Keithley will be running for re-election.

Many have compared Joe to a modern day Woody Guthrie and he is always looking for a way to push “grassroots democracy” and like his idols Woody and Pete Seeger, he and the band won’t give up.

So that in a few words is D.O.A. When they take their wild, unbridled show live show on the road, it’s a must see, because this is one of the last real punk rock bands that still gets out there and kicks ass and still tells it like it is. It’s always an atmosphere of chaos, veering out of control, but somehow, at the last minute, D.O.A., manages to reign all of it back in. And in an indescribable way, you are not quite the same afterwards.

D.O.A.’s seminal album Hardcore 81 was recently names as one of Canada’s all-time great musical accomplishments. Hardcore 81 was the searing piece of vinyl that influenced generations of musicians and spear headed the hardcore movement. In Novemver 2019 the CBC Polaris awards named it as one of the best (punk rock fans knew this all along anyways! Lol) beating the likes of Sarah McLaughlin, The Band, KD Laing and other notable artists.

TIME TO FIGHT BACK AND CHANGE THIS WORLD
TALK – ACTION = 0
Ya Hey! D.O.A. – Forty years and going strong

In this article:d.o.a., joey shithead