Not all evil is wicked…especially when it comes with a pedigree, is presented in a fantastic bottle, and was curated by a metal band that has a proven track record for choosing some excellent spirits.  Such is the case with Anthrax’s “Evil Twin I” and “Evil Twin II,” the band’s brand new, limited edition, award-winning, high-end Double Cask Ryes.  Only one barrel of each spirit will be produced, yielding 238 numbered bottles for “Evil Twin I” at cask strength of 120.1 proof.  As “Evil Twin II” has not yet been “dumped,” the number of bottles and cask strength for it will be announced shortly.  For a Happy Halloween, “Evil Twin I” is available to order starting today at Mash and Grape, and, if ordered before 10/23, delivery can be expected by 10/31.  Details for ordering “Evil Twin II” will be announced shortly, and can be expected to arrive on your doorstep in time to help make your year-end holidays a little brighter. 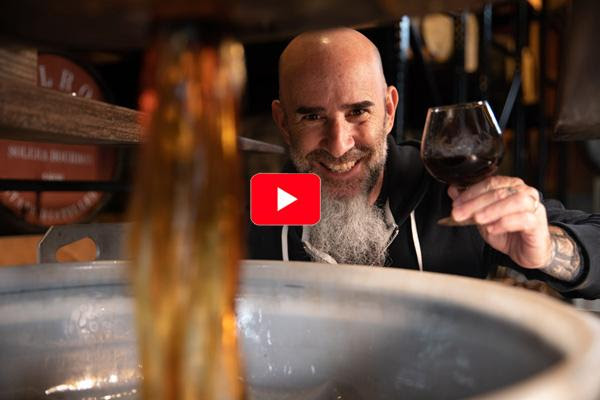 Both “Evil Twin I” and “Evil Twin II” were produced by Hillrock Estate Distillery, located in the luxuriant Hudson Valley Highlands in New York State. “Both of these whiskeys are delicious,” said Anthrax’s Scott Ian, who recently went up to Hillrock to check out the process, from the planting to distilling to the bottling.  He sampled eight different rye whiskey barrels, and personally ‘pulled the bung,’ emptying the ‘Evil Twin I’ barrel.  Check out the video HERE.
“All eight were different from each other as every barrel expresses itself differently,” Scott explained, “and I chose my two favorites. The barrel that became Evil Twin I showed off espresso, caramel, vanilla and spice – the barrel that became Evil Twin II had maple, cinnamon, clove and black pepper notes that all played together really well – both barrels were delicious so we decided to do both!  I’d put these ryes up against any rye on the market. The care and attention that went in to both of them, every step of the way, from field to glass, from the harvesting of the estate-grown rye to the distillation, to the beautiful bottles and the labels, each was made with the highest levels of perfection.”
“We’re so happy to be working again with Anthrax,” said Hillrock Estates’ owners Cathy Franklin and Jeffrey Baker.  “We had a lot of fun with the whole band on ‘The Healer’ bourbon earlier this year, and were impressed by their appreciation for delicious spirits during those tastings.  With ‘Evil I and II,’ it was great that Scott was able to come up to Hillrock and be really involved in finding the perfect blends for ‘Evil I’ and ‘Evil II.”  We’re sure Anthrax fans will enjoy both.”
“Evil Twin I” and “Evil Twin II” mark the second time Anthrax has worked with Hillrock Estate, as it produced the band’s signature bourbon, “The Healer,” this past June.  Explained Ian, “We decided to release another whiskey because it seemed like people were very happy with ‘The Healer.’  Where ‘The Healer’ bourbon was extremely approachable and smooth, ‘the ‘Evil Twins’ are spicier, sweeter, richer, stronger, and bolder.  So, when we say ‘Evil Twin,’ we mean it in a great way.”
“The Healer,” along with the band’s first two bourbon whiskeys, 2014’s “Indians,” and 2015’s “The Devil You Know,” sold out within two days.
Anthrax – Scott Ian/guitar, Joey Belladonna/vocals, Frank Bello/bass, Charlie Benante/drums, and Jon Donais/guitar – have been writing new material for the band’s next release, expected out in 2021. The new album will follow Anthrax’s 2016 release, For All Kings, the critically-acclaimed, 11th studio album that became Anthrax’s highest-charting debut in two decades when it entered Billboard’s Top 200 Albums chart at #9.